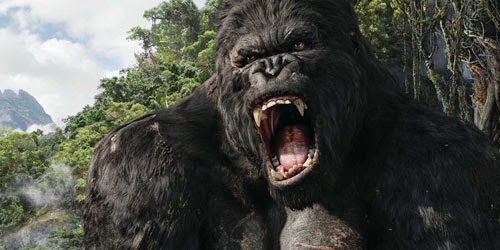 Adam Wingard’s first major studio film Godzilla vs. Kong appears to be a critical and box office hit, opening with the biggest debut since the pandemic. But it almost wasn’t his first trip into the MonsterVerse, because it turns out that Peter Jackson had handpicked Wingard to direct a sequel to his 2005 King Kong remake. Wingard told Slashfilm…

“I think in a lot of ways, the reason for [me not having to do a pitch for Godzilla vs. Kong], we have to travel back in time to 2013 or so when You’re Next was about to come out in theaters. Somehow, Peter Jackson had seen an early version of You’re Next, and he was interested in me directing a sequel to his King Kong film. It was just going to be called Skull Island. Simon Barrett was going to write it. Mary Parent, who runs Legendary now and produced this movie, was on board with that. But this movie was set up at Universal, and the King Kong rights somehow ended up at Warner Bros. That movie went to the wayside, and so did I. In a long roundabout way, I think getting that vote of confidence from Peter Jackson stuck in Mary Parent’s mind. “

Just goes to show the winding road some of these projects take, and how even an aborted project can lead to something bigger. We do know that Joe Cornish (Attack the Block) had been eyed to direct Skull Island at one point, and Jackson was interested in Guillermo Del Toro doing it. The two had an association at the time because of the ‘Hobbit‘ films. Ultimately, Skull Island became part of Legendary’s MonsterVerse with Jordan Vogt-Roberts at the helm.

It all worked out in the end. Godzilla vs. Kong is available in theaters and HBO Max right now.