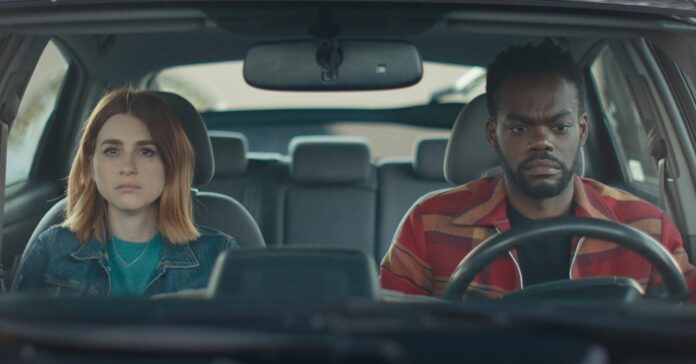 Over the past year, many couples have broken up, only to be forced to live with their exes due to COVID-19. Having to spend anytime with an ex, especially right after a break up, seems torturous. Well, actors Aya Cash and William Jackson Harper are taking us through that journey in the new trailer for We Broke Up.

Cash and Harper play Lori and Doug, a couple together for ten years before ending it all after a botched proposal (and yes, there’s vomit involved). With bad timing and such a long history together, the pair decides to fake it for three more days for Lori’s sister’s wedding. But holy matrimony only makes things more complicated and new loves and conflicting feelings get in the way.

The trailer is reminding me of two indie romantic comedies released in the last couple year. The charming Plus One with Jack Quaid and Maya Erskine and Happy Anniversary starring Ben Schwartz and Noel Wells both epitomized this new era of romantic comedies where we shifted away from the hilarious hijinks of falling in love to finding the funny in traumatic relationships.

Whatever ends up happening with Lori and Doug, you can bet they are in safe hands with Aya Cash and William Jackson Harper. Cash is best known for her take as the villainous Stormfront on Amazon Prime’s The Boys but found her footing in the underrated (and dare I say brilliant) anti-romantic comedy You’re The Worst. Last fall’s Scare Me also showcases Cash’s ability to revel in the chaos around her while staying grounded in the moment. William Jackson Harper appeared in 2019’s horror hit Midsommar, but is best known as the lovably flawed Chidi on The Good Place. For some reason, we feel like We Broke Up might tonally feel like a crossroads between those two projects, but we will have to see.

We Broke Up hits theaters and On-Demand April 23rd.