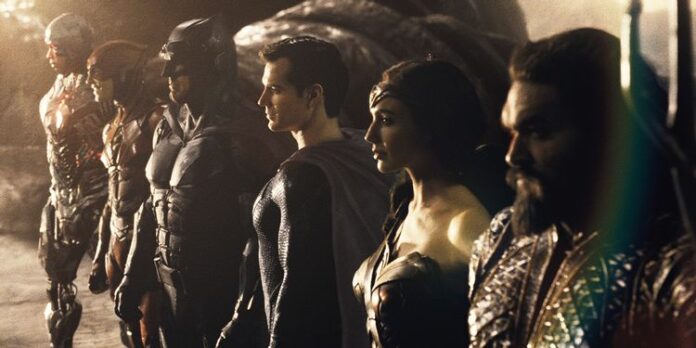 I don’t know if this is going to be more of a review or me gushing. Probably quite a bit more of the latter. Going into Zack Snyder’s Justice League, my position was that it wouldn’t amount to much, at least not for me. I thought the 2017 franken-version cobbled together from Joss Whedon with bits of Snyder’s stuff thrown in, was perfectly okay superhero fluff. So it wasn’t going to take much for Snyder, giving free rein and $70M to put together the vision he always intended, to win me over. The surprise is how much better this Justice League is than the previous one. We’re talking leaps over a tall building in a single bound better. And that leaves me with a question for Warner Bros execs: How do you NOT make Zack Snyder’s Justice League canon and the only version of this movie that matters?

While a good deal of the film will feel familiar, the differences are vast. We’re talking over two-hours of additional footage that Snyder has put back in and reassembled, along with some new scenes added in recent reshoots. But these aren’t all moments of just excessive action and destruction the way we’re accustomed to from Snyder. This is crucial context and backstory that was sorely missing, including for the primary villain, Steppenwolf, who transforms from a bland CGI creation into a fully-realized character and one of the best DCEU villains if not the best, period. It’s a low bar, I know.

In terms of the actual plot, it remains largely the same. Steppenwolf is here on Earth to find the three Mother Boxes, powerful objects that can basically reshape the entire universe. He needs them for his master, Darkseid, the Thanos-like ruler of Apokolips and destroyer of thousands of worlds. Batman (Ben Affleck) has seen all of this, and along with Wonder Woman (Gal Gadot) has set out to assemble a team of heroes who can stand against the invasion, and live up to the promise made to Superman (Henry Cavill) when he perished in Batman v Superman.

It can’t be stressed how epic Zack Snyder’s Justice League feels, and by that I also mean the runtime. While it never gets boring or really drags at any point, it’s also clear that breaking this down into an HBO Max miniseries would’ve been the smart way to go. Roughly two hours of the film is table setting, as Bruce Wayne and Diana Prince  try to put their team together, recruiting the loner would-be king of Atlantis, Arthur Curry aka Aquaman (Jason Momoa), the awkward and aimless speedster Barry Allen aka the Flash (Ezra Miller), and the troubled machine man, Victor Stone aka Cyborg (Ray Fisher). Six chapter breaks perfectly align where each episode could have, and should have ended, at appropriate cliffhangers and emotional peaks. I’m not sure why the decision was changed to keep it as a complete movie, perhaps for an easier transition to IMAX theaters at a later date?

Of this new footage, it’s Flash and Cyborg who see the most benefit, giving their characters backstories that flesh out our understanding of them. Barry Allen’s humor really shines through here, and it’s what crazy is that Whedon’s movie was edited in such a way so as to emphasize humor because Snyder’s cut was considered too grim. But I laughed a lot more here than I ever did at Whedon’s. We finally get the long-awaited moment where Flash meets and rescues his future love, Iris West (Kiersey Clemons), wrapped around his attempts to score a dog walking gig to save enough money to bail out his father (Billy Crudup), in prison for murder. Barry’s whole story is sweet and funny; he’s so awkward that his successes, like an incredible Speed Force-powered moment that saves the day in the final battle, really resonate as accomplishments for him.

We’ve heard Snyder say that Ray Fisher’s performance as Cyborg is the “heart” of Justice League and he’s not wrong. So much of his story was left out by Whedon, and considering all that we’ve learned about their problems on set it leaves me to wonder if that was a deliberate blow against the actor? The reason I ask that is because Cyborg’s journey provides so much of the movie’s emotional richness. A stellar football star who loses not only his mother but his humanity after a tragic accident, Cyborg is transformed into someone who can literally connect to any technology in the world. But the bigger problem for him is connecting with people, and finding new purpose as a hero, protecting a world he had given up on. It’s a journey that most of the other heroes have already taken, but we get to see him go through it step by step and it’s surprisingly affecting.

I thought the handling of Superman in the previous film was just so sloppy, and I’m not just talking about the whole mustache debacle. His return to the land of the living failed to resonate because it felt tacked on to a story that Whedon had no investment in. But here, Superman’s arrival, in his black costume no less, has real purpose in setting the Man of Steel as a symbol of hope at the planet’s darkest hour. The relationship between the two most-important women in Superman’s life is enriched, Martha Kent (Diane Lane) and Lois Lane (Amy Adams), as well as the importance lessons learned from the two men who shaped him, Zor-El (Russell Crowe) and Jonathan Kent (Kevin Costner). Not only that, but the fight between a reborn, amnesiac Superman against the Justice League is absolutely badass, and a hint at a dark future Snyder was setting up that we’re unlikely to ever see. It establishes Superman as virtually unstoppable if he wants to be, even against a united front of superheroes.

While it’s disappointing that we may never truly get to see Darkseid in action, at least Snyder has worked wonders in rehabilitating Steppenwolf. Not only has the armored baddie received a visual upgrade, but so has his motivation as he battles to redeem himself in the eyes of his master. His fanatical crusade actually has something behind it now, and not just a bland desire to see the planet destroyed.

Of course, this being Snyder he can’t help but cram too much stuff in here. There are appearances by other heroes he has long promised, such as Green Lantern and Martian Manhunter, with allusions to others. Jared Leto returns as the Joker in a Knightmare sequence that is confusing, to say the least, and I’m not sure why the Clown Prince of Crime needed to be in it.  He simply can’t help himself. Snyder always goes big, swinging for the fences with swelling operatic numbers when the moment doesn’t necessarily call for it. While the hype score by Junkie XL helps him out a great deal, and dammit that Wonder Woman battle theme gets me out of my seat EVERY time, you still come away feeling that Snyder could take it down a few notches.

But here’s the thing: even when Snyder overreaches he’s just indulging in his love of these characters and the story he’s telling. He is a fanboy in every sense of the word, and that definitely is a double-edged sword. Everything Snyder does is objectively “cool” from a fan standpoint, but to casual viewers a lot of it won’t make a lick of sense. Snyder can only see things as a fan and as someone who is in that tribe with him, I’m totally down with that. Snyder’s passion is so infectious that you just want to go along on this ride with him, for all of its hills and valleys. Whedon’s Justice League never inspired that kind of loyalty even from its defenders. Zack Snyder’s Justice League isn’t just the superior cut of the film it’s great on its own merits and makes the DCEU stronger. While Snyder has told us there are no plans to continue on with his “Snyderverse”, something tells me this isn’t over. The fans, who have already spoken quite loudly, won’t allow this to be the end.

‘The Woman In The Window’ Trailer: Amy Adams Thinks She’s Witnessed A Crime In The Long-Delayed Netflix Thriller