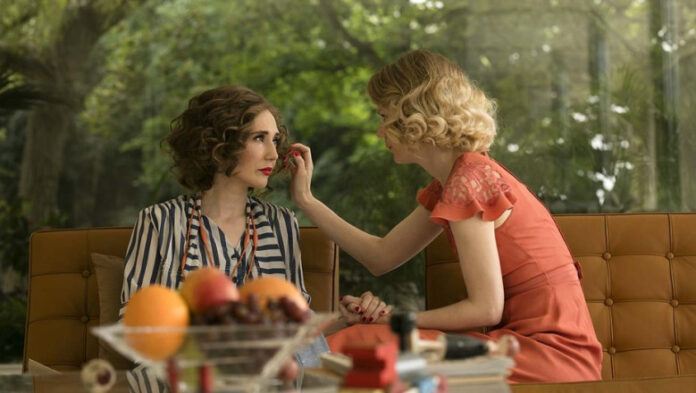 American releases of European films can be difficult. Names get changed, nuances aren’t always obvious and many things get lost in translation (even if the film is in English.) The new Czech film The Affair, from Vertical Entertainment and director Julius Ševčík, fall into similar trappings.

A few years before World War II, a newly married couple, The Landauers, team up with an architect to build a beautiful modern house overlooking the Czechoslovakian city of Brno. Despite an entire wall made of glass overlooking the city at the heart of the home, both Liesel (Hanna Alström, Kingsman franchise) and Viktor (Claes Bang, The Girl in the Spider’s Web, The Burnt Orange Heresy) are not as transparent in their marriage. Viktor’s eye keeps landing on the nanny and Liesel’s relationship with her best friend Hana (Carice van Houten, Game of Thrones) is closer than others may think. As the world enters war and secrets start coming out of the closet, the house and the glass room become a mental and physical lifeline to the past and the possible future. Based on The Glass Room by British author Simon Mawer (and reffered to by that title in foreign markets), this period piece is overdesigned with not much to say.

As leads, Hana Alström and Carice van Houten try their best to make their characters three-dimensional and layered. However, like everything in this movie, their attempt comes off muddled and confusing. Surprisingly van Houten plays a very similar character to the one she is known for. Both Hana and Game of Throne’s Melisandre are calculating, frigid, and angry.  Now that I think about it, I don’t think I’ve seen Van Houten smile onscreen. The Affair does give Van Houten the chance to show off her range if she even has one. Alström struggles to convey the complexities of her character’s inner motivation but without internal dialogue, her acting choices and her character’s development feel disjointed.

When a director decides to treat a setting like another character in a film, you’d expect that place to get some sort of character arch. Ševčík doesn’t do much to establish what makes this home so special, why this family longs to stay, why Hana uses it as a way to be closer to Liesel when they are apart. While the house deteriorates in the background, it becomes a very good representation of the film itself: cold and hollow.

Time doesn’t stop for anybody but it certainly doesn’t stop in The Affair. The plot jumps months, years, and even decades with little warning and if you are not an expert on mid-20th century European history, a lot of context is lost in the execution. Whether it’s director Julius Ševčík not giving us enough visual cues or Andrew Shaw’s script not providing enough exposition, it’s hard to know where we are historically and narratively.

Riddled with problems but beautiful to look at, The Affair feels like the film equivalent of the shrugging emoji. With such an uneven and cracked foundation by director Julius Ševčík, why should we care about these characters or this house at all?

The Affair is available now through VOD. Watch the trailer below.

‘The Affair’ Trailer: Clarice Van Houten, Hanna Alström, & Claes Bang Star In A Story Of Forbidden Passion In The 1930s