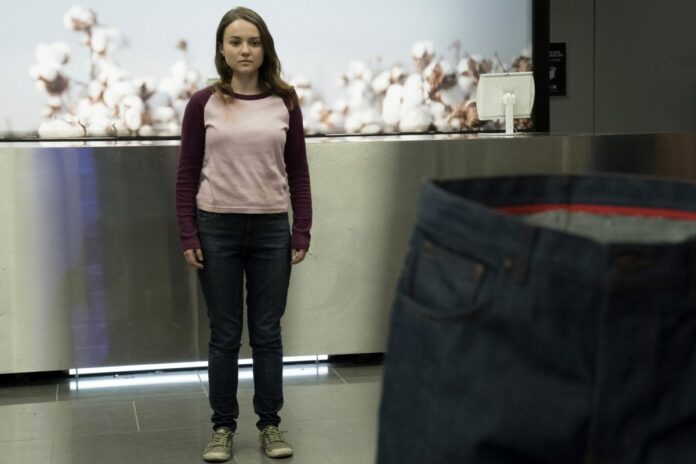 Shudder is back at it with its newest horror-comedy Slaxx. Libby (Romane Denis) finally has landed her dream job at the hottest clothing store in town – CCC. Libby figures If she’s going to be spending all her money there anyways, might as well get the employee discount. CCC is about to change the game and roll out the newest trend in clothing – The Super Shapers. These jeans are the latest and greatest in the denim revolution and adopt to body sizes. They are made from a special cotton that is only found on the Indian subcontinent. The problem is regulations and labor laws leave a lot to be desired. If that information was leaked, problems may arise for a company that promotes itself as making a better tomorrow…today. To prepare for the release, CCC has hired workers for an overnight lockdown and Libby is one of those lucky few. 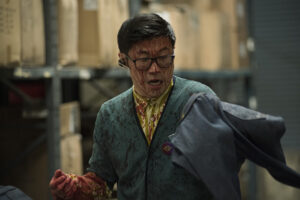 The store manager Craig (Brett Donahue), is feeling the pressure as all eyes are on their store, including CEO Harold Landsgrove (Stephen Bogaert). To add to the stress, instastar Peyton Jules (Erica Anderson) is coming to try out the Super Shapers. Craig has to rally the troops – Shruti (Sehar Bhojani), Lord (Kenny Wong), Jemma (Hanneke Talbot), and Hunter (Jessica B. Hill). Seems like a manageable task except for one small wrinkle – a pair of Super Shapers with its own agenda. This pesky pair of pants has a thirst for blood and revenge. Yes, you read that correctly, there is a pair of possessed killer pants. As workers keep disappearing, Craig is scrambling, and Libby tries to keep her head above water. Good thing they are under lockdown and trapped in the store with the demonic denim.

Slaxx is not a true ‘horror’ in the sense of the word. Sure, there is plenty of blood and death – which clearly are two staples of horror. Yet, Slaxx doesn’t try to scare you. In fact, it does the opposite. It is a dark comedy at its core. There are funny moments and jokes throughout. It strikes the perfect balance of ludicrous possessed behavior and funny employee hijinks. Slaxx also is deeper than a simple horror. There are messages about child labor, corporate practices, consumerism, and social media influencers mixed in with the ridiculousness. I never thought I’d be saying that a movie about possessed pants wreaking havoc had a message, but Slaxx proved me wrong. This message may not sit well with everyone, but I think a majority will appreciate what writer Patricia Gomez and writer/director Elza Kephart were going for. 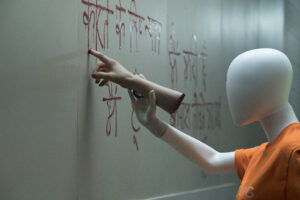 Speaking of Gomez and Kephart, the script was fantastic. It was clever and never dragged. Granted the film is barely an hour and fifteen minutes, so not much room for it to drag. Watching Libby navigate one irrational coworker to the next is a joy. Denis is perfect as the bright eyed and bushy tailed new girl being thrown to the wolves. Gomez and Kephart successfully capture, and slightly hyperbolize, many aspects of consumerism. The CCC store itself perfectly complements the witty script. The bright and welcoming front of the store contrasted against the bleak, dark, and gray hallways in the back. Kephart adds some fun camera shots and transitions into the mix as the cherry on top. Slaxx is a unique and very enjoyable, albeit quick, ride. Just turn your mind off, embrace the absurdity of the premise, and be sure to try Slaxx on for size.

Slaxx will be streaming exclusively on Shudder starting March 18th.

Review: ‘Shoplifters Of The World’