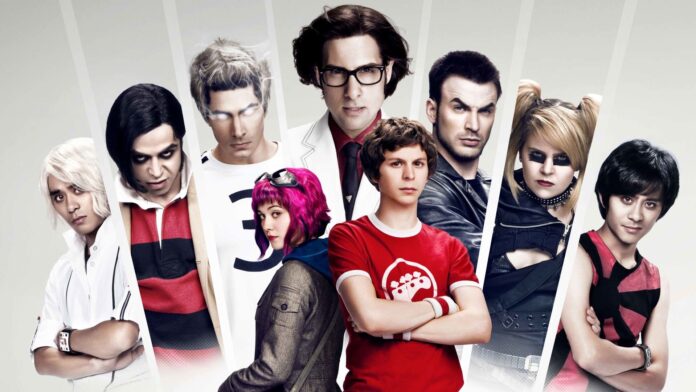 Scott Pilgrim vs. the World should’ve been a gigantic blockbuster smash. Released in 2010 by Shaun of the Dead director Edgar Wright, the film combined video games and coming-of-age Canadian quirk, geeky pop culture humor, along with a cast of rising stars including Michael Cera, Chris Evans, Brie Larson, Aubrey Plaza, Mary Elizabeth Winstead and so many more. And yet…it just wasn’t the right time. The world wasn’t ready. Superhero movies weren’t where they are now, and the whole thing just came across as an oddity.

To be fair, although the film would go on to become my #1 favorite movie of the decade, even I didn’t really get it the first couple of times around. And I had read the comics from which it was adapted.

Well, the time for Scott Pilgrim vs. the World to get its moment to shine on the big screen has arrived. Wright has announced a new deal to re-release the film into AMC theaters beginning April 30th, using the peak audio/visual technology of Dolby Atmos and Dolby Vision.

Hell the fuck yes. And as part of that announcement, Wright has dropped a new trailer.

So, this has long been in the works #ScottPilgrim fans, but I'm pleased to say that in North America on April 30th, the film will come back to the big screen, looking and sounding better than ever in @DolbyCinema, Watch the epic new trailer & get tickets: https://t.co/Jiy4OoY6vQ pic.twitter.com/gOK5QapLLI

If you don’t know the plot of Scott Pilgrim, basically it follows the titular slacker Canadian dude as he deals with the relationship baggage of Ramona Flowers, the new girl who has caught his eye. If Scott wants to win her heart, he’ll need to defeat her seven evil exes, who are played by actors including Chris Evans, Mae Whitman, Brandon Routh, Jason Schwartzman, and more.

Not only will the film return to theaters, but Wright confirmed a new 4K Ultra HD Bluray release is in the works, too.

What’s cool about the film is how easily it blends video game tropes (save the princess!!) into a teen romantic comedy. It also has some amazing music, including the track Black Sheep that I still hit up on a regular basis. Work it, Brie!