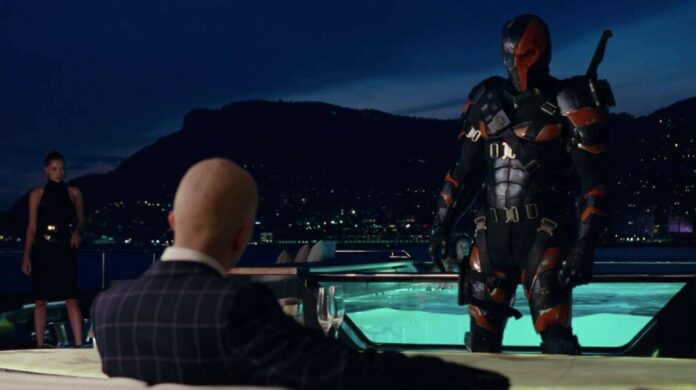 All of that joy and elation surrounding Zack Syder’s Justice League is giving ways to some depressing realizations. The Snyder-verse is dead, Batfleck is no more, and consequently all of the projects attached to those specific things are now DOA. If nothing else, I pray they find a way to move forward with Joe Manganiello’s Deathstroke movie and today we have one more reason why you should pray for that too. Manganiello sat down with the ComicBook Nation Podcast and gave some details as to what was planned for Deathstroke’s role in Ben Affleck’s The Batman. The film, which was setup in the (originally) post-credits scene on Lex Luthor’s boat, would have seen Slade Wilson (Deathstroke) hunting down the Batman in Gotham City. Wilson, being Bruce Wayne’s equal (or possibly better) in hand to hand combat would get the upper hand on Batman making way for a very special guest to intervene and save the day. Manganiello said:

“…Batgirl jumps in to try to help Bruce because Deathstroke is so fast that he can anticipate Bruce’s movements. And there was this huge fight in Gotham City”

This would have been awesome to see for so many reasons, not the least of which FINALLY seeing Batgirl on the big screen actually kicking ass (no Batman & Robin, doesn’t count). Even past that, it’s a true shame that we don’t have a film featuring Deathstroke in any stage of production. Everyone talks about how these superhero movies always have villain problems, well Slade Wilson is about as cinematic a villain as you can ask for. Imposing, eye-catching, exciting, on the physical side and the character himself is more complex then 90% of the usual rogues. They’ve started to scratch the surface on this on HBOMax’s awesome Titans but there’s still a ton more to showcase.

Review: ‘Shoplifters Of The World’