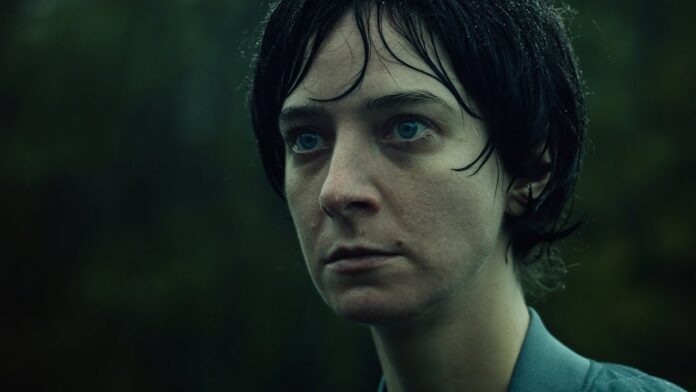 I heard a lot about Violation during Sundance last month. The revenge thriller has been playing the festival circuit since TIFF, and will head to SXSW next. Marking the feature debut by filmmakers Madeleine Sims-Fewer and Dusty Mancinelli, the film stars Sims-Fewer in what many are calling a breakout performance as a woman who pays a heavy price for the retribution she exacts against a betrayer.

Watching the trailer, you can see why Shudder was quick to pick this one up. The whole vibe is ominous, from the dark colors, the woodsy setting, and the lake which projects foreboding rather than a sense of serenity. The entire film was written, directed, and produced by Sims-Fewer and Mancinelli, with Anna Maguire, Obi Abili, and Jesse LaVercombe rounding out the cast.

Violation will be released by Shudder on March 25th.

“With her marriage about to implode, Miriam returns to her hometown to seek solace in the comfort of her younger sister and brother-in-law. But one evening a tiny slip in judgement leads to a catastrophic betrayal, leaving Miriam shocked, reeling, and furious. Believing her only recourse is to exact revenge, Miriam takes extreme action, but the price of retribution is high, and she is not prepared for the toll it takes as she begins to emotionally and psychologically unravel.”