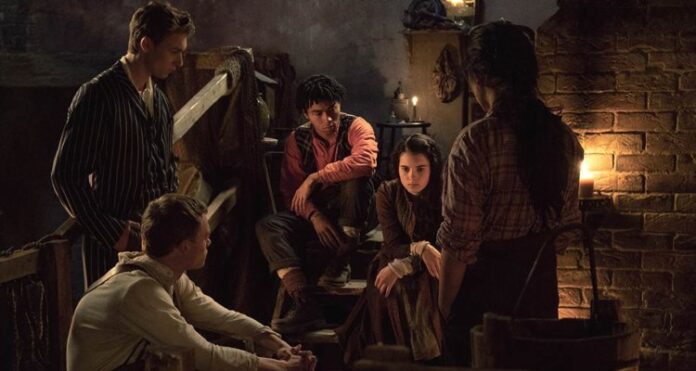 Netflix is going all-in on the Sherlock Holmes universe, but through the lens of younger characters. Following on the success of Enola Holmes, the streamer has released a teaser for The Irregulars, which focus on the Baker Street Irregulars from Sir Arthur Conan Doyle’s novels.

The Baker Street Irregulars were a gang of misfit kids who aided Sherlock Holmes in a handful of cases. The Irregulars takes this idea and adds a sinister, supernatural aspect to it. Starring in the series are Thaddea Graham, Darci Shaw, Clarke Peters, Jojo Macari, McKell David, Harrison Osterfield, Sheila Atim, with Aidan McArdle as Lestrade, Royce Pierrseon as Dr. Watson, and Henry Lloyd-Hughes as Sherlock Holmes.

Tom Bidwell (Watership Down) wrote and exec-produced the series.

The Irregulars is a dark, mysterious eight-part drama that follows a gang of troubled street teens who are manipulated into solving crimes for the sinister Doctor Watson and his mysterious business partner, the elusive Sherlock Holmes. As the crimes take on a horrifying supernatural edge and a dark power emerges, the Irregulars (based on the Baker Street Irregulars gang from the original books by Sir Arther Conan Doyle) must come together to defeat larger-than-life forces.