Cowboys, a new familial drama, explores some complex issues with a Western backdrop. Troy (Steve Zahn) and Sally (Jillian Bell) are recently separated. Their trans son Joe (Sasha Knight) has a special bond with Troy that Sally is inherently jealous of. A bond that features their own signals and language. Joe has also always been fascinated by Troy’s childhood cowboy stories. Stories that Sally is tired of Troy filling Joe’s head with. On top of this jealousy, Sally cannot come to grips with Joe identifying as a boy. In her mind Joe is still Josephine, her little girl that she used to dress up in dresses and force to play with dolls. Troy is arrested after an incident stemming from an untreated mood disorder leading to a manic episode. Sally gets full custody of Joe after the arrest, but all he wants is to be with his father. 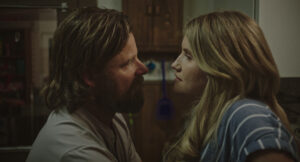 One fateful evening the situation reaches a boiling point when Sally finally breaks down. Joe begs Troy to let him go with him and that’s when a plan begins to set into motion. Troy is going to take Joe and head towards the Canadian border. In Canada the two of them can start fresh without the stigma they are facing in Montana. Troy gets Joe out of the house, and they set off for their journey on horseback. Joe is finally able to experience Troy’s cowboy stories firsthand. Sally enlists the help of the police and Detective Faith (Ann Dowd). As Faith continues on the case, she is torn as she starts to see the complexity of the situation. Joe and Troy’s adventure is going to change the lives of everyone involved, hopefully for the best. 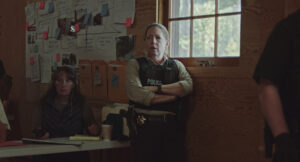 The entire cast is fantastic and is the backbone behind Cowboys. The film is focused on relationships and needed strong performances to thrive. Luckily everyone did not disappoint. Zahn and Bell really show their versatility. Both have been in a variety of roles but may be known more for their comedic roles. Zahn is perfect as a caring father, who may be wacky and suffering from his own demons but is still incredibly relatable. Bell is able to successfully portray a mother who means the best but is balancing love for her child and what she believes is societally acceptable. Bell also is perfect at displaying a fierceness and attitude that we have seen countless times from her previous roles. Knight’s portrayal of Joe is perfect and pulls at the heartstrings. He captures the fear of the unknown and the difficult experience a young boy is going through. 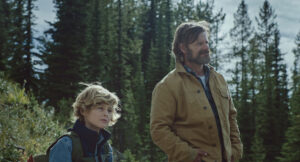 Cowboys is the first feature length film from Anna Kerrigan, who wrote and directed. Kerrigan is able to successfully tell a powerful story and do so concisely. Kerrigan has the audience caring about these characters and their wellbeing – physically, emotionally, and mentally. Even though many aspects of the story most can’t empathize with, you still find yourself relating with the characters. That is not an easy feat to manage and Kerrigan does so masterfully. 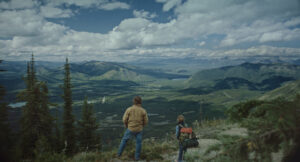 Kerrigan mixes in flashbacks to really paint the full picture. We see the evolution of how Joe’s family ends up in the situation they are in. It’s is very impressive to see all that Kerrigan accomplished with such a short runtime. This does leave us with some areas that aren’t fully explored. Cowboys touches on gender identity, mental illness, and societal stigma (just to name a few). Kerrigan does a valiant job touching on the surface of these topics, but it was impossible to dive too deeply into any. There are some scenes and shots in Cowboys that are truly memorable and will be with me for quite some time. Add in a little Western musical flair and Kerrigan delivers an emotional and touching drama that is worth a watch.

Review: ‘The Right One’