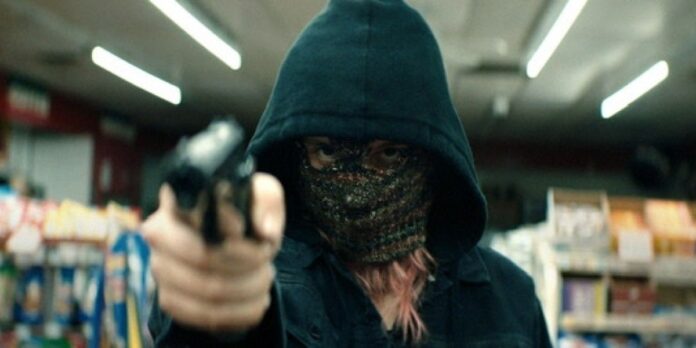 There are a number of movies about the current drug crisis, told in the context of the failed war on drugs. It’s amazing to think that 21 years after Traffic made high art out of such a deep dive, we’re still telling variations of the same story. Body Brokers, which may sound like a Cronenberg horror movie but is actually a new drama from director John Swab, puts focus on the drug rehabilitation industry and how it’s less about helping people than about turning a profit at their expense.

Body Brokers is a solid film but it’s also something you wish was better because there’s real value in breaking open the rehab industrial complex now when so many are struggling with opioids. Swab’s approach is similar to The Big Short but lacks the witty construction and insights to measure up. The film follows Utah (Jack Kilmer), who we meet as he’s robbing an Ohio convenience store with his girlfriend and fellow drug addict, Opal (played by the always-excellent Alice Englert). They manage to get away, but it isn’t long before they’re in need of more cash to keep up the habit. A montage shows the lengths Opal is willing to go, a line of men having their way with her in cheap motels, while Utah sits outside alone with his thoughts. He’s over this life, and when approached by the smooth-talking Wood (Michael K. Williams) with an offer to go to rehab in Los Angeles, he jumps at the chance even if it means leaving Opal behind.

Body Brokers isn’t so much about Utah’s recovery, though. In fact, he shakes his addiction to crack and heroin in no time, thanks to the help of an intake nurse played by Jessica Rothe, and a stern, plain-spoken therapist played by Oscar nominee Melissa Leo. It’s then that Wood reemerges and the movie’s main thrust opens up. He brought Utah in to get a referral bonus, part of a multi-billion-dollar fraud scheme where patients are shuffled in and out of treatment facilities, milked like cash cows for insurance payments and kickbacks, all made easier by provisions in the Affordable Care Act. Wood is what’s known as a “body broker”, meaning his job is to find people just like Utah, then rotate them into the system and do whatever he can to make sure they stay in it. This is business, pure and simple, and each patient can potentially be worth hundreds of thousands of dollars.

There are a lot of angles to play, and Body Brokers tries to have its cake and eat it, too. But these various stories clash tonally, and while they’re all entertaining in their own way, you wish Swab could have focused on one more than the rest. Wood takes Utah under his wing, and the young pupil trades one addiction only to be hooked on the easy money and extravagant lifestyle. At the same time, he’s struggling with selling out people who are legitimately looking for help, including some he’s really close to, while also trying to stay clean himself. Body Brokers begins to take on the shape of a crime thriller as the stakes get raised, the law starts poking its nose into the situation, and people start dying.

If only that were it, but Body Brokers shifts gears yet again and introduces Frank Grillo as Vin, who doubles as both the movie’s all-knowing narrator and Wood’s shady partner-in-crime. The problem is that his introduction is jarring, sporadic, and unnecessary. We don’t really need Vin’s narration to explain the nuances of such a broken system when the characters are already doing that easy enough.

What Body Brokers does really well is depicting how addicts tend to transfer their obsession into other things. Utah throws himself into his new line of work and all that comes with it, but when things get tough, it opens the door to a relapse. There’s also some really good performances here, especially by Williams who is totally believable as the charismatic, charming Wood, a total salesman through and through. Rothe is also terrific as May, a former addict who becomes a calming influence on Utah; and Englert captures the down ‘n dirty struggle addicts face, made worse by a treatment system that chews them up.  If there’s a problem on the acting side, it’s Kilmer, who is just too reserved for us to feel Utah’s conflicted emotions or the pain he carries.

While individual aspects of Body Brokers work to expose a fraud that uses drug addicts like ATM machines, the lack of focus distracts from the righteous anger we should be feeling about that.  There’s a good movie here and it’s still worth seeking out, but a better one with a clearer vision could be what draws attention to this ugly side of the healthcare industry.