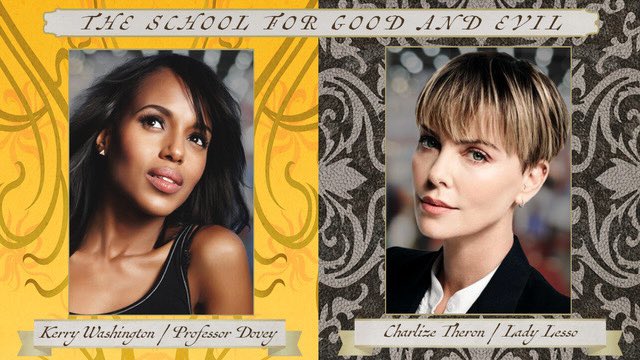 You can always count on two things from Paul Feig movies: a solid dose of comedy, and a terrific cast. For his latest, a Netflix adaptation of The School for Good and Evil, he’s definitely got the latter with the additions of Kerry Washington and Charlize Theron.

Feig announced on social media that Washington and Theron have enrolled in The School for Good and Evil, an adaptation of Soman Chainani’s YA novel.  The story follows two girls who see their friendship tested when they are chosen to attend rival fairy tale schools, one for good and another for evil. Washington will take on the role of Professor Clarissa Dovey, Dean of Good; while Theron is Lady Lesso of the School for Old Evil.

The lead roles of best friends Sophie and Agatha have gone to Sophia Anne Caruso and Sofia Wylie, respectively.

Similar to the Harry Potter films, you can expect a mix of young actors and veteran stars. Three books made up the first series, which was followed by a second trilogy set in the land of Camelot, so if the first film is a hit expect the franchise to grow.

I know what school I’m applying to! So thrilled to welcome Charlize Theron and Kerry Washington to the School for Good and Evil! Everyone, prepare to get schooled! @CharlizeAfrica @kerrywashington @netflix @NetflixFilm pic.twitter.com/IgmoDABkp0