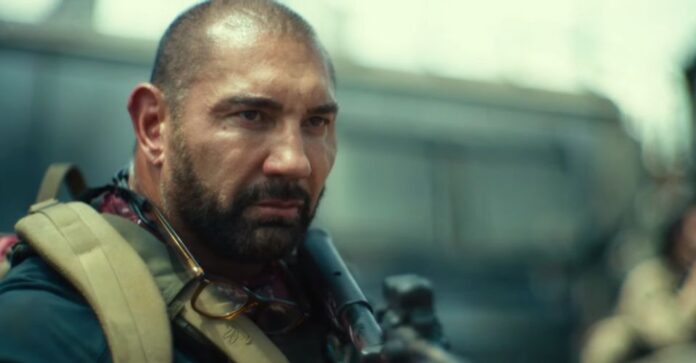 While it’s awesome that after all of these years we’re finally getting Zack Snyder’s Justice League next month, let’s not forget he has another blockbuster film arriving just a couple of months later. Army of the Dead is a combo zombie apocalypse and heist movie, starring Guardians of the Galaxy‘s Dave Bautista. I can scarcely think of a duo better suited to work together than Snyder and Bautista, and the new teaser is worth getting excited over.

Done in a style very similar to his Justice League trailers, with soaring music backing the action, Army of the Dead shows Bautista as part of a team of mercenaries who venture into the dangerous quarantine zone in Las Vegas, site of a zombie outbreak, to pull off the greatest heist ever. The supporting cast includes Theo Rossi, Tig Notaro, Garret Dillahunt, Raúl Castillo, Omari Hardwick, Hiroyuki Sanada, Matthias Schweighöfer, Ella Purnell, and Ana de la Reguera.

The film marks Snyder’s first return to the zombie genre since his excellent 2004 remake of Dawn of the Dead, which was written by Bautista’s pal James Gunn. Snyder’s career took off after that movie, and now’s a perfect time to see what it can do for him now as he attempts a true comeback.