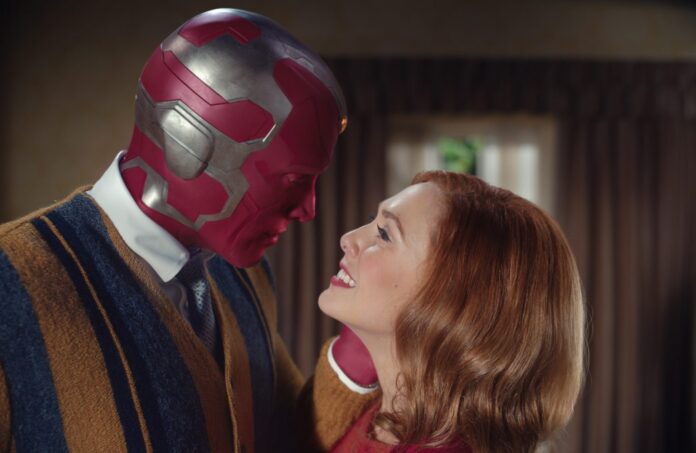 While we shouldn’t expect the Marvel Cinematic Universe to walk in lock-step with Marvel Comics, there’s one universal truth when it comes to Wanda Maximoff aka Scarlet Witch: she doesn’t deal with grief or trauma very well. In fact, when tragedy strikes, Wanda tends to do weird things to reality, using the incredible powers that are hers to command. This seems to be the central premise behind WandaVision, an ambitious, giant-swing effort from Marvel Studios in the first of many upcoming shows on Disney+. I was lucky enough to catch the first three episodes, and while it’s definitely not enough to judge the first full season, there’s still a lot to chew on that could mean big things for the MCU.

Marvel has taken some big gambles before, but nothing quite like WandaVision, this strange avant-garde effort in which director Matt Shakman and writer Jac Shaffer play around with various sitcom tropes. It’ll be interesting to see if viewers with no familiarity with TV shows of the 1960s can latch on, or if they’ll be turned off by the peculiar laugh track, black & white color scheme, and extremely dated references. The good news is they won’t have to cope with any particular style for very long, as each episode moves into the style of a new decade.

The mystery that is WandaVision is how this story is happening at all. We all know what happened to Wanda (Elizabeth Olsen) and the synthezoid Vision (Paul Bettany), oddball lovers who were ripped apart when Thanos tore the Mind Stone out of his head, and she was wished away by the villain’s “snap”. She came back in Avengers: Endgame, and he…well, Vision didn’t.

And yet here they are in a ’50s-style suburb made in a studio backlot, with canned laughter to accentuate the many corny jokes. The first episode is done up in a style similar to I Love Lucy, right down to the mundane storyline centered on marital miscommunication, workplace problems for poor Vision (who toils at one of those fictional companies that produces a lot of…well, nothing), and wacky neighbors. The second episode moves into more of a Bewitched/I Dream of Jeanie mode, with Wanda’s powers creating as many problems as they fix. The third episode moves into color, and a slightly more hip, feminist attitude similar to That Girl.

Sure, things look perfect, but we know there’s something amiss.  It takes a while for Wanda and Vision to begin to see it, too, but the extent of the problem has yet to be revealed. I’m not one who has immediately subscribed to the notion that this fabricated sitcom world is all of Wanda’s doing, perhaps as her means of escaping a cruel reality into the style of TV she perhaps watched as a kid in Sokovia. It just as easily could be one of the other major characters in the show. Kathryn Hahn’s a welcome presence as the “nosy neighbor” Agnes, who seems to always be there at just the right time and knows more than she’s letting on. There’s also Teyonah Parris who we know is playing the grown-up Monica Rambeau, seen as a child in Captain Marvel. Rambeau grows up to become one of the many women to hold the Captain Marvel title, but here she’s mainly just Wanda’s black neighbor friend. There’s surprisingly more color, and I don’t mean the technicolor, in this mostly-white neighborhood than the actual shows of these eras had.

As an X-Men fan, my first thought was that they are trapped in Mojoworld, an alien planet in which the people are enslaved by their addiction to Earth television. Could this be a backdoor way to reintroduce Marvel’s mutants? Probably not, but the geek in me gets all excited just thinking about it.

The first two episodes are cute, clever in the way they weave in jokes about Vision being an android (“You must have a screw loose”), while Wanda is a bit of a ditz. If there’s a problem it’s that Shakman and Schaeffer might have been too successful in replicating those old TV shows, because they can be tough to sit through until some kernel of the MCU we know is hinted at. The mystery keeps you engaged just enough, but then in episode 3 a handful of events happen all at once that could have major ramifications on the MCU. Considering neither Wanda or Vision was given much of a personality in their previous appearances, it’s a little disappointing that we aren’t truly seeing who they are here, either. At least not yet.

Once the full story starts to reveal itself, WandaVision begins to come into its own, teasing the big superhero action we’ve come to know and love. It just takes some time getting there. This is such a weird way to kick off Phase 4, and I’m truly blown that a show like this exists as part of the fabric that is the Marvel Cinematic Universe. It doesn’t always work, but I can’t wait to see how the rest of it unfolds.

Obviously, the score is just for these initial episodes and not the entire season. Reviews will pick up once more when the fourth episode arrives.