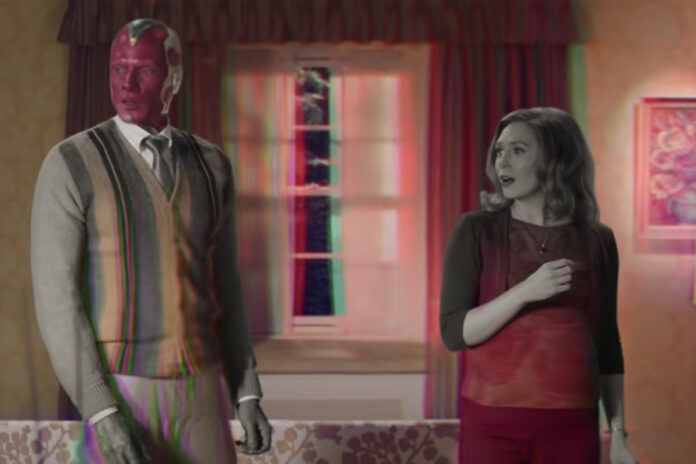 Calling all Marvel fans. Disney+ has a treat for you all ahead of the WandaVision premiere next week. Instead of one episode, next Friday’s installment will feature a two part opener. One of the first Marvel projects new to the platform, WandaVision will follow superhero couple Wanda Maximoff aka Scarlett Witch (Elizabeth Olsen) and Vision (Paul Bettany) as they find themselves in a very different reality than when we last saw them in Avengers: Endgame.

The synopsis is as follows:

After the events of Avengers: Endgame (2019), Wanda Maximoff and Vision are living the ideal suburban life in the town of Westview, trying to conceal their powers. As they begin to enter new decades and encounter television tropes, the couple suspects that things are not as they seem.

Pulling from over 60 years of TV sitcoms, the show was influenced by television staples such as Bewitched, The Dick Van Dyke Show, I Love Lucy, My Three Sons, Father Knows Best, The Adventures of Ozzie and Harriet, Bewitched, Friends,  Full House, 30 Rock, and Parks and Recreation. Joining Olsen and Bettany are some sitcom veterans including Kathryn Hahn (Parks and Rec), Randall Park (Fresh Off the Boat) who also appeared in Ant-Man and The Wasp, Kat Dennings (Two Broke Girls) from the early Thor films, and even Debra Jo Rupp who played Kitty Foreman in That 70’s Show.

As a kid who was lovingly forced fed Bewitched and The Dick Van Dyke Show as a youngin’, loved Full House, That 70’s Show and the unproblematic version of Roseanne, who then grew up obsessed with 30 Rock, Community and Parks and Recreation, I’m excited to see what WandaVision turns out to be. I’m not an avid Disney+ viewer, but this show seems to have the right amount of pop culture reverence to pull me in.

WandaVision premieres January 15th on Disney+. Watch the trailer below.