Home News Marvel ‘WandaVision’ Clip: Wanda And Vision Are Spooked By A Bump In The...
Facebook
Twitter 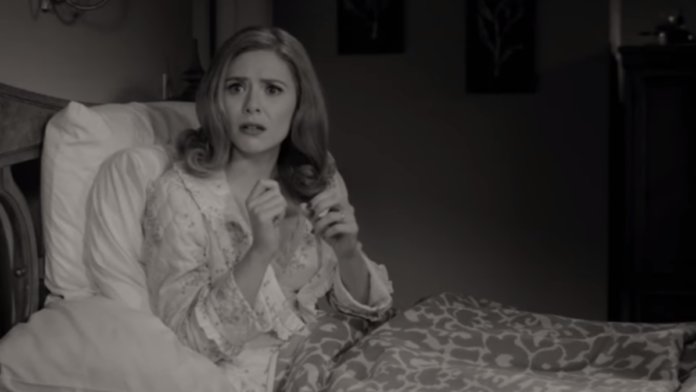 It seems hard to believe, but the first Marvel Studios project in well over a year arrives in just over a week. WandaVision is the first of Marvel’s upcoming line of Disney+ shows, starring the pair of Avengers lovebirds Wanda Maximoff aka Scarlett Witch and the android Vision, who find themselves in a weird reality designed to look like classic TV sitcoms. Elizabeth Olsen recently appeared with Jimmy Kimmel and dropped the first clip, which offers a bewitching look.

Clearly designed, based on the look and the twinkling sound effects, this scene is taking after the series Bewitched. Wanda is awoken by a loud noise and uses her powers to turn on the bedroom lights. I like how Wanda and Vision (Paul Bettany) have the separate twin beds because we couldn’t be led to believe couples actually had sex back then. After urging Vision to look out the window, he finds nothing but is soon startled by the same noise.

It’s possible the sound is someone from the outside trying to break down the barriers of this reality, as we’ve seen in some of the previous trailers. Then again, it could just be one of their wacky neighbors.

WandaVision hits Disney+ on January 15th, and will have direct ramifications on Doctor Strange in the Multiverse of Madness which opens next year.