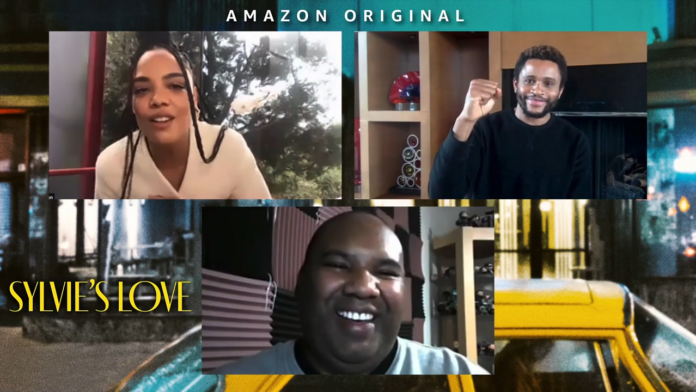 Sylvie’s Love, out right now on Amazon Prime, is something that is a rare breed in Hollywood. A classic romance featuring two African-American leads, played by Tessa Thompson and Nnamdi Asomugha, does not happen often but that could be about to change. Directed by Eugene Ashe, the film is an old school-style Hollywood love story, set in the Harlem jazz scene of the 1950s, following an aspiring TV producer and a sax player whose lives and careers intertwine, yet the passion never fades.

I had the chance to speak with Thompson, Asomugha, and Ashe about Sylvie’s Love, and what it means to make a classic black love story. We also discussed the immaculate production design and music, capturing a mood that feels timeless.

There’s also an incident at the end where Asomugha and Thompson take a keen interest in my Funko Pop! collection, and I get cut off just as things are really getting interesting.  Also, apologies for the low sound on Asomugha’s mic.

Sylvie’s Love is available right now on Amazon Prime video. Check out my review here and the interviews below!