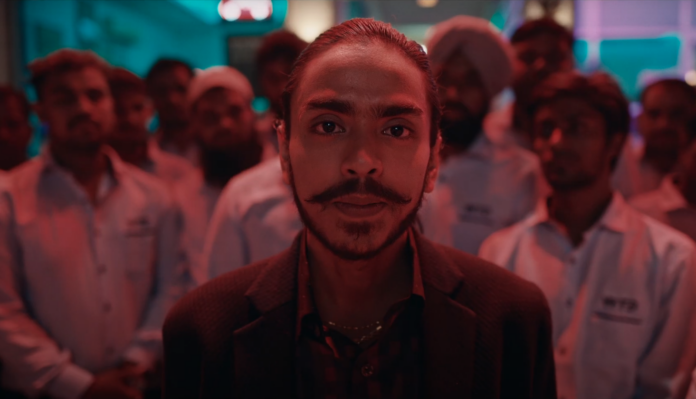 The rage of India’s permanent underclass fuels Ramin Bahrani’s The White Tiger, a sharp, witty crime drama that’s like Dickens with a little bit of Scarface. Bahrani, who through films Chop Shop, Man Push Cart, Goodbye Solo, At Any Price, and 99 Homes, has spent his career focused on the plight of the working class and the poor, adapts Aravind Adiga’s award-winning novel with an eye towards dark humor and a spirit of rebellion. No rags-to-riches story comes without a price to pay, and that cost is usually in blood and the loss of one’s soul.

Unless you’re talking about Slumdog Millionaire, in which the lead character played by Dev Patel managed to change his fortunes simply by being a good person. At times it seems like The White Tiger is here to be a cold slap in the face, one in which the only way for the poor to rise up through a corrupt system is to be corrupted themselves. The lead character, a rakish urchin named Balram Halwai (Adarsh Gourav), comes to embrace cynicism and violence as a means to an end. Told from an early age that he is a “white tiger…the rarest of animals that only comes around once in a generation”, Balram’s reality sure doesn’t reflect it. Growing up in a small Indian village, Balram watches his father pull a rickshaw until he dies from untreated tuberculosis. His greedy grandmother forces her grandchildren to slave away so they can give her all of their rupees, ensuring they meet a similar fate as their father. Worse, any remaining amount they have must go to powerful landlord The Stork (Mahesh Manrekar) , a fee that ensures these people stay buried at the bottom of the pecking order.

Bahrani doesn’t actually start there, however. Instead, he begins at a crucial inflection point for Balram years later. Having risen from the slums to become personal driver to The Stork’s American-schooled son Ashok (Rajkummar Rao), Balram is enjoying life until his boss’s wife Pinky (Priyanka Chopra Jonas), who is driving, runs over a poor pedestrian. Since the victim is a nobody, it’s likely nothing will come of it. But the precautions taken by Ashok’s family put Balram in jeopardy, and open his eyes to the idea that there is no honor in living life as a loyal servant. That message is hammered into the heads of the underclass so that they never even think of fighting back.

But for Balram, fighting back against his fate is all he can do. Either that or become like the chickens in a coop; “They can see and smell the blood; they know they are next, and yet they don’t rebel.” Metaphors like this are littered throughout, as Bahrani sticks painfully close to Adiga’s source material. To be fair, this is Bahrani to a tee. He’s always been one for heavy message-making but here he has the benefit of a timely, biting story that arrives just as India is seen as a future economic powerhouse just as America’s place on the world stage wanes. The decline of “whites” and the rise of the “yellow man and brown man” is a recurring theme as Balram scratches and claws his way out of India’s “darkness”, the aspect of itself it wants nobody else to see.

The offbeat, roguish nature of Balram’s story is captured through narration, and while this is usually a clunky plot device it works here to establish the difference between his old self and the new. Three years after the accident, we see Balram, stylishly dressed, his hair slicked back and cool; he has become a confident businessman of some renown. Also of some arrogance, as he pens a letter to the incoming Premier of the People’s Republic of China, Wen Jiabao, insisting it is beneficial that they meet, but not before telling the story of his rise-to-power. Why in the world would Jiabo care about such a thing? Why would he ever read this? It’s ridiculous, and The White Tiger is full of such silly, satirical flourishes that prevent it from becoming too dreary.

A great deal of fun is had in following Balram’s underhanded journey, in which he screws over Ashok’s main driver to take the job for himself. He then becomes best friends to his boss, who along with Pinky detests the brutal caste system. What Balram eventually figures out is that everything is a contradiction. Ashok might be more fair-minded than others in his family, but when in their presence he’s prone to his father’s demeaning way of thinking. Pinky is the most conflicted of all, having grown-up in New York to a poor bodega-running family, but now accustomed to a certain life of privilege.

The White Tiger is best when exploring larger themes on this personal level. Balram’s friendship with Ashok and Pinky is fleshed-out nicely, and it’s easy to see how the interactions change them all, for better and worse. Nobody alters their way of thinking more than Balram, faced with a bag of cash destined for his idol, the “Great Socialist”, basically a final blow to his hope of a true and honest Democratic system.

While this is a little bit depressing, the tone is kept light by colorful cinematography, an upbeat score of hip-hop and Bollywood tracks, and Gourav’s charming performance as Balram. It’s unnerving, but also entertaining to watch his disarming smile, so often used to mollify his masters, evolve into something akin to a wolf baring its fangs. By the time The White Tiger draws to an enigmatic close, this uplifting story of a social climber has revealed itself to be a dire warning to the comfortable.

Netflix will premiere The White Tiger on January 22nd.