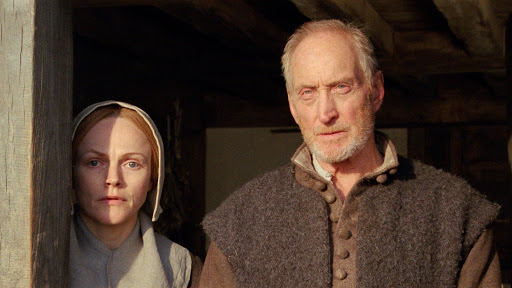 The Delivered tells the story of the Lye family in Shropshire in 1657. John Lye (Charles Dance) was a Captain in Oliver Cromwell’s army. His time with the army brought him to Shropshire where he ended up settling down. John purchased a farm and married Fanny (Maxine Peake) who gave him a son – Arthur (Zak Adams). The three of them lived a simple life on their isolated farm. Like most during that time, John and Fanny were extremely religious. John also had a heavy hand when Fanny or Arthur were perceived to be out of line. Fanny and Arthur just accepted this as their way of life and tried to stay on the straight and narrow.

One fateful day, two strangers – Thomas Ashbury (Freddie Fox) and Rebecca Henshaw (Tanya Reynolds) – found their way to the farm. They tell John and Faye that they were robbed, and all their money and possessions stolen. John has some sneaking suspicions about the pair but decides to trust them for the time being. Thomas slowly begins feeding ideas of a different life to Faye and Arthur, but everything is still going swimmingly. That is until the High Sheriff for the Council of State (Peter McDonald) and Constable (Kenneth Collard) arrive. The two of them are looking for Thomas and Rebecca. With Thomas and Rebecca’s cover blown, a series of events are set in motion that will change everyone’s lives forever. 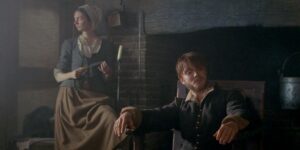 The Delivered has been classified as a drama, horror, and thriller. Right off the back I want to set the notion straight. Calling it a horror is a complete misclassification and even a thriller is a bit of a stretch. It is a drama with some graphic sexual scenes and a bit of violence. Viewers that are expecting a horror or a lot of thrills will most likely be disappointed. Most of the film is dialogue driven and has elements of verbal/psychological torment. Writer/director Thomas Clay makes some great choices in The Delivered. The script (albeit slow), settings, and costumes were spot on with capturing the feeling of 1600s The music begins as slow and methodical, picking up intensity as the film reaches its breaking point. England. Clay used narration to set up the story including enough foreshadowing to pique interest, but not give too much away.

It is certainly possible to appreciate aspects of a film and still not truly like it. This was exactly the case with The Delivered. Yes, the performances were above par (especially Peake’s) and Clay was able to successfully transport the audience back to the 17th century. However, that didn’t make up for the slow pace and lack of true excitement throughout the film. I kept waiting for that truly wow moment that wasn’t related to an overly graphic sexual scene, which never came. There are numerous films that deal with similar situations. That makes it even more imperative to include instances and scenes that really set yourself apart. Unfortunately, The Delivered is never able to do so. When the dust settles, The Delivered is a forgettable drama that wastes a decent premise and solid performances.

Review: ‘Raya And The Last Dragon’