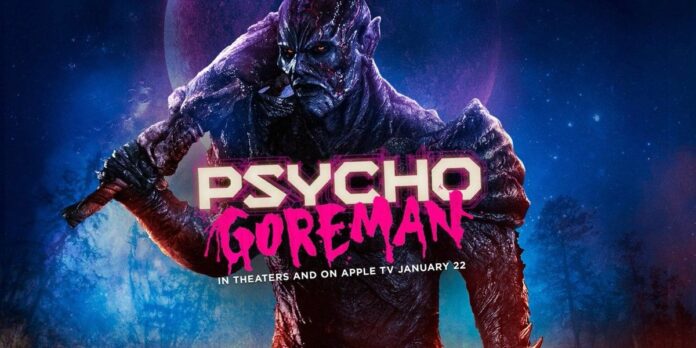 There is a saying in film that’s used to describe a movie that works even though it probably shouldn’t, generally speaking they say those movies “know what they are”. PG: Psycho Goreman, a Canadian, low-budget, sci-fi/horror/fantasy epic, knows EXACTLY what it is and revels in it with unabashed glee. Writer/Director Steven Kostanki has created a film that’s less an homage to 80’s sci-fi fantasy films in the vein of Krull, and Masters of the Universe, but more of a continuation. The kind you can only get from someone with a true love for the source genre. I guess I should probably start telling you what this movie is about. Two siblings, Mimi (Nita-Josee Hanna) and Luke (Owen Myer) who find an otherworldly gem in their yard while out playing. They soon find out that the gem is the source of power and control of an inter-galactic warlord from the planet Gigax who was imprisoned after a planet-clearing wave of terror across the galaxy. This is where it gets fun, after learning that she controls the monster the fearless Mimi names him Psycho Goreman, or PG for short, and decides that an alien murder-monster would be awesome to have as a bestie. Meanwhile the other alien rulers that imprisoned PG in the first place have learned of his awakening and are gearing up to put him back where he belongs. Sounds amazing right? Well, I’ll just put it on front street that your answer to that question will immediately dictate whether this is a movie for you or not. 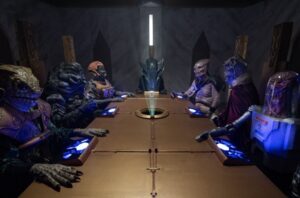 With that crazy, but also not to unfamiliar story in check Kostanski needed to make sure the budget for his low-budget affair was utilized in the right places. The decision appears to have been made that everything goes toward the costumes and effects, money well spent if you ask me. This is where the true beauty of PG: Psycho Goreman lies. They were able to perfectly capture the look and feel of an effects heavy mid-budget film from the 80’s, right down to the purple lightning that ripples over victims ensnared in PG’s telekinetic grip. PG himself is a standard demon type monster, but with enough creative decision choices (like his purple color) to make him unique, but it was the rest of the alien characters that really caught my eye. The “committee” scenes look like a design book of characters from anime, 50’s sci-fi, and the grindhouses of the 70s all mixed into one eclectic group. Whether through choice or necessity there does not appear to have been any modern tech used in their creation or in their performances and the result is an overabundance of charm. You can really feel that the filmmaker and effects team grew up reading “Monster Maker Quarterly” magazine and dreamt of doing this exact thing. My favorite design must be a tie between the brain-being who is heavily featured in the trailer and the galactic enforcer character who appears to be an angel from an anime version of the bible. Of course, effects alone do not make a movie entertaining. Kostanski’s script, while not gearing up to win any Oscars, is sharp and surprisingly funny. The undeterred evil coming from PG amid his new suburban surroundings make for some real laugh out loud moments. 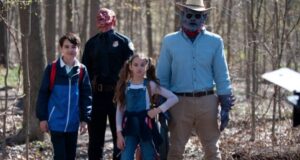 This isn’t all to say that PG: Psycho Goreman is a perfect movie, that pretty much goes without saying. First of all, the film is only going to appeal to about 3% of the population, thankfully I’m in that group but those who aren’t, well they will most likely put this flick in the terrible, if not fully unwatchable column. The performances by the human characters are far from compelling at best and downright annoying at worst. The story itself doesn’t take any unexpected turns and goes point to point with what you expect. 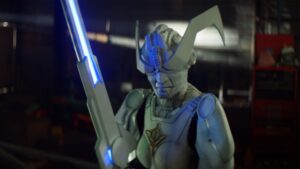 While there are a number of negatives going against PG: Psycho Goreman it’s got one thing that trumps everything else, it’s a lot of damn fun. If Steven Kostanski was out to pay homage to the movies he loved as a kid I would say he exceeded his target. The care and real love put into the making of this movie is readily apparent and if you find yourself in that small group that watched this trailer and said “YES! I have to see that!” you will not be disappointed. The rest of you? Well I’m pretty sure you already made up your mind about this flick.