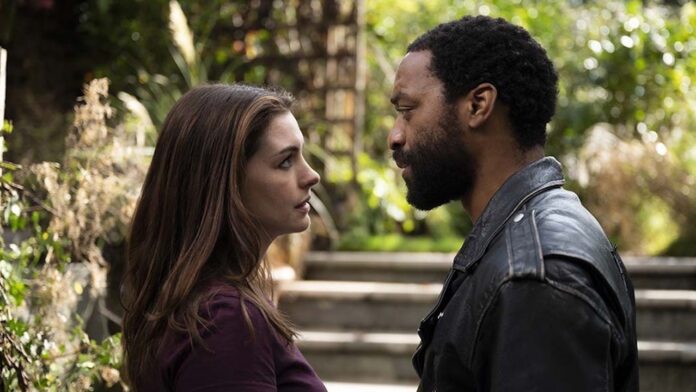 There are heist movies, and then there are badly-paced, chatty relationship movies disguised as heist movies. Doug Liman’s unreasonably lame Locked Down is definitely the latter, but it’s even worse than that. Billed mightily as one of the first major films to incorporate the global pandemic into the production and storyline, it comes across as little more than a way for Liman to show what he can do under such restrictions.

The answer is “not much”, unless your interest is in watching two terrific actors play dithering, unlikable people while loads of celebrities dial-in for cameo ZOOM calls. Oh, and there’s like ten minutes of a “heist”, which really amounts to the main characters walking around a shopping mall eating free food. At least no people were endangered in the making of Locked Down. It’s got that going for it.

Anne Hathaway and Chiwetel Ejiofor play the insufferable Linda and the possibly mentally-unstable Paxton, lovers who are going through what many of us who are stuck inside with another person are going through. Basically, they’re driving one another nuts. Not only are they miserable to one another, they’re pretty miserable to us, too. Paxton is a former bad boy, who attracted her with his motorcycle-ridin’ ways. Now he’s just a regular schlub who drives a security van, lost and aimless at the way his life has turned. Linda is a CEO at a fashion company struggling through the pandemic, and she’s given the awful task of firing “redundant” employees over Zoom.

In general, this isn’t an awful set-up, but Locked Down is constructed terribly. It’s fully an hour of dull back-and-forth, the worst of it being Zoom chats with various celeb guest stars such as Ben Stiller, Dule Hill, Stephen Merchant, and Mindy Kaling, who all look bored and like they’d rather be doing ANYTHING else. These online conversations are also just not very appealing to look at on a cinematic level. They match the general malaise that is over the entire thing. Homer-or-strikeout screenwriter Steven Knight puts his emphasis on the minutia of quarantine in an effort to grab us

Assuming you make it through the first hour, the plot element finally arrives as their jobs intersect with Harrods department store, which is closing down (so this is around March or April) and its valuables, including a £3 million diamond, which is up for auction. The idea of two bored ex-lovers getting behind such a crime isn’t without merit, but the film lacks any credible motivation for one of them. We understand Paxton; this is a way for him to reclaim some of that last mojo, and perhaps even win Linda back. But for her, the reasons are less certain. She’s already pretty well-off financially, if unfulfilled by her work. Is it just boredom? It’s funny, because they talk, incessantly, about everything else, relaying every single thought on their heads and yet this one thing is left cloudy and I’m not sure it’s intentional.

Liman, an expert action filmmaker who is on Tom Cruise’s speed dial (they’ll be going to space together soon) shoots like he’s afraid to step on anybody’s toes. There’s a potentially great heist caper here, one with characters whose irrational choices are fueled by unease over the pandemic. Locked Down wants so badly to be of this moment in time that it misses the opportunity to be that as well as entertaining.