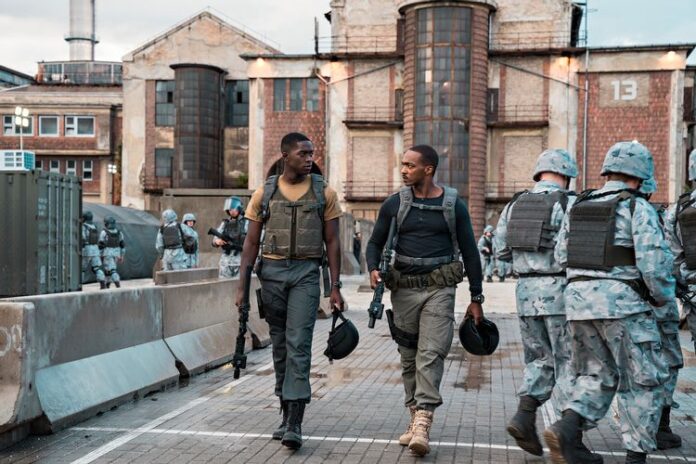 The relationship between Anthony Mackie and Netflix stretches back to his work on Altered Carbon, a weird sci-fi series that had a loyal, if small, fanbase. Mackie seems to be drawing from his time on that show to propel his performance in Outside the Wire, a futuristic story in which he plays an android killing machine.

Directed by Mikael Hafstrom (1408) and co-starring Damson Idris (Farming), Outside the Wire follows Leo, an android military officer who teams with a human drone pilot on a top secret mission to find and neutralize a doomsday device.

The buddy/mismatched vibe is strong here, and we know from Mackie’s experience with Marvel how good he is at that stuff. But this also looks like a potentially star-making role for Idris, who has also appeared in episodes of Black Mirror and The Twilight Zone.

In 2036, America serves as a peacekeeping force and human troops on both sides are supported by robot combatants called Gumps and drone pilots monitoring skirmishes from thousands of miles away. But after headstrong drone pilot Lieutenant Harp (Damson Idris) disobeys a direct order to intervene in a conflict, the Army deploys him to a military outpost to confront the human costs of his button-pushing. Harp’s expectations of guarding a fence are upended when his new commanding officer Captain Leo (Anthony Mackie) announces plans to infiltrate the demilitarized zone and apprehend Viktor Koval (Pilou Asbæk), a warlord who intends to launch a network of dormant nuclear weapons. Soon, Harp learns that his theoretical experience as a drone pilot means little out on the battlefield under enemy attack — especially after discovering that Leo is an A.I.-enhanced supersoldier whose strength, speed and demand for results promise to turn his real-world education into a trial by fire.