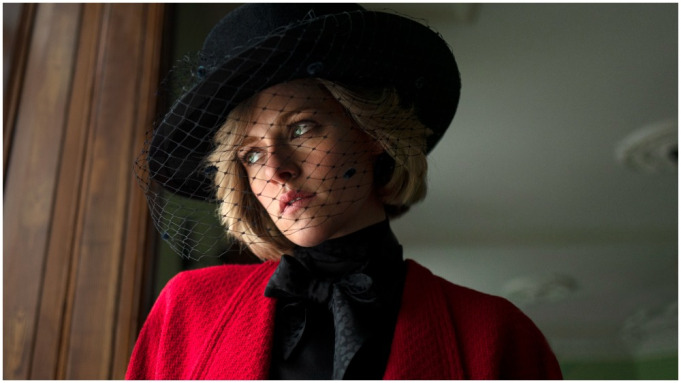 When Kristen Stewart was cast as Princess Diana in Spencer, the new film from Jackie director Pablo Larrain, many saw it as stunt casting.  There will always be scrutiny on anybody who plays the beloved Diana, and Stewart is a pretty divisive actress on her own. But now we have the first look at Stewart in the role and she at least has the Princess of Wales’ look down.

Spencer stars Stewart as Princess Diana, and takes place during one fateful weekend when she makes the decision to leave Prince Charles. Joining the cast today are Timothy Spall (Mr. Turner), Oscar winner Sally Hawkins (The Shape of Water), and Sean Harris (Mission: Impossible-Fallout). The script is by Steven Knight, of Peaky Blinders, Locke, and Eastern Promises fame. And also of Serenity and Locked Down infamy.

The image shows Stewart’s Diana staring out of the window and into the middle distance, rockin’ a red blazer, black blouse, black hat, and stylish fascinator. Still, getting the fashion and the makeup is the easy part. We’ll have to wait and see if Stewart can capture the presence that made Diana such a dynamic, popular figure.

SYNOPSIS: “December, 1991: The Prince and Princess of Wales’ marriage has long since grown cold. Though rumours of affairs and a divorce abound, peace is ordained for the Christmas festivities at Sandringham Estate. There’s eating and drinking, shooting and hunting. Diana knows the game. This year, things will be a whole lot different.”