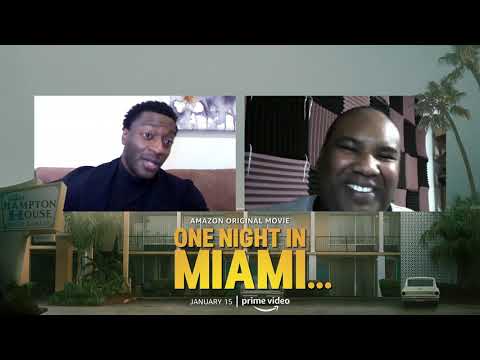 Jim Brown, All-Pro and Hall of Fame running back. Muhammad Ali, boxing’s most recognizable World Heavyweight Champion ever. Malcolm X, fiercely outspoken member of the Nation of Islam. Sam Cooke, silky smooth singer and composer known as “The King of Soul”. Not just among the best in their chosen fields, but important voices in the fight for civil rights during the turbulent 1960s. But it wasn’t easy for all of them to make the decision to join that fight, and put their hard-won careers at risk.

Regina King’s directorial debut One Night in Miami is receiving accolades all around the world, and so is its cast. Aldis Hodge, Eli Goree, Kingsley Ben-Adir, and Leslie Odom Jr. star in the film about one incredible (and fictional) night in 1964 when Brown, Ali, Malcolm X, and Cooke all meet to discuss race, religion, and their responsibility to activism.

It makes for a heated, thrilling conversation that still resonates today. I had a chance to speak with Hodge, Goree, Ben-Adir, and Odom Jr. about taking on the challenge of playing these iconic black men, but I also wanted to know how they felt about the movie’s central question. As celebrities and men of influence, what is your responsibility to fight for causes bigger than yourself?

One Night in Miami is available now on Amazon Prime and it’s a movie that simply must be seen. Check out my review here and the interviews below!

DC Readers: Attend A Free Virtual Screening Of ‘One Night In Miami’

‘One Night In Miami’ Trailer: Regina King’s Directorial Debut Is One Of The Year’s Best