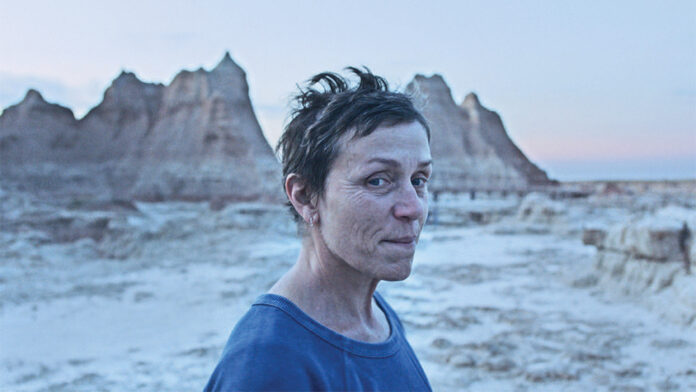 You’ve been hearing us and others talk about Nomadland a lot over the last few months. I first reviewed the film at Middleburg back in October, and it ended up at the top of my Best of 2020 list. Chloe Zhao’s drama is all but assured a Best Picture nomination at the Oscars, and one in Best Actress for star Frances McDormand. But most of you haven’t actually been able to see the movie yet. Well, that’s about to change and you’ll have no shortage of options to do it.

Fox Searchlight has announced theatrical and streaming release dates for Nomadland, and they’re coming up quick. In a bit of a surprise, the road trip drama will be available in select IMAX theaters beginning January 29th. The drama about a financially-strapped woman who packs up her things for a life on the road as a nomad isn’t the most obvious choice for IMAX, but then you see Zhao’s footage of wide-open expanses across the American countryside and…yeah, it kinda makes sense.

Starting on February 29th, Nomadland will be released into traditional and drive-in theaters. That is also the same day it will be available to watch on Hulu, for those who prefer a streaming option.

Trust me, just see it any way you can.