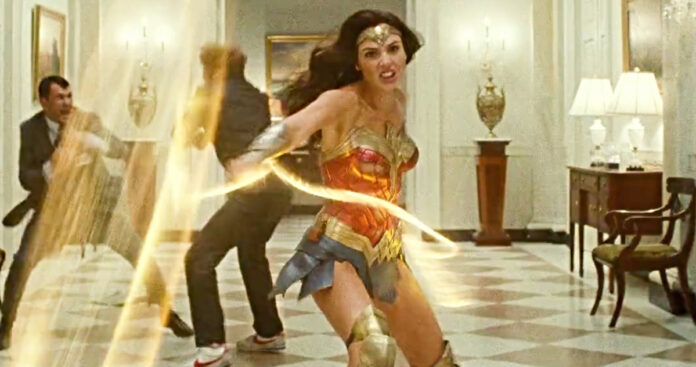 It’s the 1980s. The era of Gordon Gekko, Reaganomics, Alex P. Keaton, and the “greed is good” mentality. Ther perfect time to introduce a charlatan get-rich-quick scam artist as the villain of Wonder Woman 1984, Patty Jenkins’ anticipated sequel to 2017’s hit film. Centering the sequel around the evils of extreme excess and a supervillain con-artist is just one of many good ideas Jenkins and co-writer Geoff Johns dream up for a film that is awash in corny nostalgia, bright colors, and abundant earnestness. As the DCEU’s most hopeful superhero, Wonder Woman is the perfect cure for both the ’80s and as the capper to an awful 2020, but sloppy plotting and unfocused characterization dull what could’ve been a more enjoyable experience from our only major comic book movie of the year.

Whatever problems come later, you won’t find them in the rousing opening sequence set on the island of Themyscira. It’s here that a young Diana races adult Amazons in a race, and we see how exceptional the future superhero was even then. Soaring through air, hitting bullseye with her bow, leaping over obstacles, Diana is heads above the others…but she takes a shortcut that gets her disqualified and a stern talking-to from Antiope (Robin Wright) about honesty and how it’s the only way to truly win; that taking shortcuts is no way to achieve one’s goals.

“No true hero is born from lies.”

That theme resonates throughout Wonder Woman 1984 in unsubtle ways. Diana is living in secret in Washington, DC, working as an anthropologist at the Smithsonian. She still yearns for the love of her life, Steve Trevor (Chris Pine), who she lost years ago, and has never met the like since. As the television screens light up with shady grifter oilman Maxwell Lord (Pedro Pascal, all big smiles, cheap suits, and helmet hair), preaching that “If you dream it” you can have it, Diana just wants to find happiness again. She does eventually make friends with overlooked co-worker Barbara Minerva (Kristen Wiig), an awkward woman who comes to admire Diana’s beauty and style, presuming because of it she is always happy.

The plot revolves around an archaeological find, a magical stone that grants any wish. It takes some time for everyone to figure out what it does, but when Lord gets his hands on it he claims the power all for himself. However, Diana has already used it, mistakenly, to wish for the return of Steve Trevor, while Barbara wishes to be more like Diana. The world descends into chaos as Lord becomes the master of all wishes, granting them all without any concern for the catastrophic repercussions.

So…a stone that grants wishes. It’s a plot that would be right at home in a DC Comic from the 1980s, and clearly that’s what Jenkins is going for. This is meant to be a light-hearted romp, a page-turner for fans of the funnybooks, and more often than not it is. A fight scene taking place in a mall finds Diana swinging off the walls with her golden lasso of truth, saving innocents and wowing all of the wide-eyed kids. This is who Wonder Woman is, and we love her for that. She’s truth and justice and all things good in the world, and that’s something we could all use more of right now.

But there’s also pain, any great comic book hero is made by the tragedy they carry inside. While it should be obvious by now, Steve Trevor does return, fulfilling every hope that Diana ever wanted. The exact circumstances of it are best left unsaid, but they are, in keeping with the rest of the movie, sorta corny yet strangely endearing. The chemistry between Gadot and Pine is still great, and some of the movie’s best moments are as she introduces him to the future. The parallels to Diana’s experiences as a fish-out-of-water in the first movie are clear and a lot of fun. Instead of becoming obsessed with ice cream, Steve devours Pop-Tarts and is stunned by modern aviation. There’s just so much joy in these scenes where he is discovering the world, his eyes big as he takes it all in. His return comes with a price, though, and soon we learn that Lord’s power has a Monkey’s Paw stipulation attached.

The way we make this discovery about Lord is mind-boggling, because there seems to be no real established rules to his powers. Playing fast and loose with the details doesn’t just apply to his abilities, but his motivation which has to keep changing as his powers change to fit the needs of the story. Unfortunately, the same goes for Barbara. Wiig is great as the shy, clumsy scientist whose admiration of Diana turns into toxic jealousy, then something else altogether as she gains strength of her own. She’s just never really defined well, and eventually is just thrown in there as a bland villain standing by Lord’s side because, well, Wonder Woman needs someone she can punch. That also turns out to be a problem for the film, because Lord isn’t the kind of bad guy that is best for a physical hero like Wonder Woman. She can’t beat him up, and his schemes aren’t directly about her.

Action scenes are…good, but hardly anything to write home about.  The most that can be said about them is they are colorful and full of bombast, but they also feel a little bit empty. This, again, has to do with Wonder Woman not having much in the way of true physical competition, at least not until the final act when Barbara takes her abilities to a dangerous new level. The biggest setpiece finds Diana and Steve taking out Lord’s convoy. It just doesn’t amount to much because there’s no personal stake attached. When she and Barbara do finally throw down, it’s short, static, and only mildly satisfying. Wiig really dials in to Barbara’s insecurities but later as Cheetah something just doesn’t quite click.

After championing a theatrical release all throughout the pandemic, Patty Jenkins recently gave her thumbs up to a release on HBO Max, stating to io9 that she wanted to bring something good to people during this difficult time…

“This is the moment where this thing we have can become something to give, and a better thing, and try to be about hope,” Jenkins said.

Jenkins has never hidden her good intentions with Wonder Woman 1984, and for the most part she succeeds in them. But this being the second chapter to an ongoing franchise, and considering the heights of its predecessor, one can’t help but wish Diana had a more cohesive story to truly display why she is the hero the world needs.