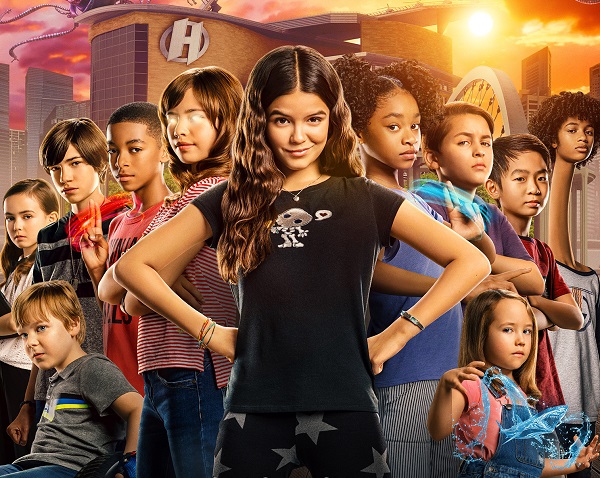 There’s two different versions of director Robert Rodriquez: one for older folks, and one for children. For those a little older and prone to unabashed, fun, crazy violence, we have the “Mexican Trilogy” (El Mariachi, Desparado, and Once Upon a Time In Mexico), From Dusk Till Dawn, Machete, Sin City, and countless others. There is also a soft spot for the director at making family-friendly films that are almost at odds with his more mature style like the Spy Kids series, and of course, The Adventures of Sharkboy and Lavagirl, which he made with his own children not only in mind, but they helped him craft the story for. While not a critical or commercial darling, Sharkboy and Lavagirl managed to gain a cult following, especially with younger children, who now are semi-adults as well. Leave it up to Netflix to go into the nostalgia well and make a standalone side-sequel: We Can Be Heroes.

Instead of just focusing on Sharkboy and Lavagirl, We Can Be Heroes wants to expand the universe and introduce a bigger world full of many different heroes. In an almost Avengers/Justice League type of way, there are “The Heroics.” The Heroics are a group of adult superheroes that monitor things across the globe and help fight evil. For one, it looks like Netflix really opened their bank vault for some famous faces, or Rodriguez calls in every favor imaginable. There’s Marcus Moreno (Pedro Pascal): a master swordsman, Tech-No (Christian Slater): a hero who flies a jet pack, Miracle Guy (Boyd Holbrook): basically Superman, Kung-Fu Man (a little too on the nose with Sung Kang): who has super speed, (of course) Sharkboy and Lavagirl, and countless others. The only problem with this superhero team is that they are mostly narcissistic adults, full of their own set ways, pride, and ego. When an alien invasion comes, and it’s time for all The Heroics to “assemble,” they find themselves beaten and kidnapped by their invaders rather quickly.

At the same time, all of The Heroics’ children are all in “school” at the Heroics headquarters under the watchful eye of Ms. Granada (Priyanka Chopra). She orders the kids to stay put, but since when do children ever listen to adults? Marcus Moreno’s daughter Missy (YaYa Gosselin) is powerless and wonders why she is even there, but quickly adapts and starts to take charge. She leads the other children Wheels (Andy Walken), the literal guy in the chair; A Capella (Lotus Blossom), who like her mother has superpowers of singing and can levitate objects; Ojo (Hala Finley), who can predict the future with her drawings; twins as Bally (Akira Akbar) and Rewind (Isaiah Russell-Bailey) who can speed up and rewind events as they happen, Jim (Dylan Henry Lau) who has hilariously “slow” powers, unlike his father Kung Fu Man, scene-stealer Guppy (Vivien Lyra Blair) who is Sharkboy and Lavagirl’s daughter, and countless others. Of course, they are kids, they are scared, but slowly but surely, they step up and realize they have to replace the void that their parents.

The “teen Heroics” go through an uncharacteristically quick heroes’ journey, complete with a Danger Room type of training while in hiding from both the government and the aliens under the teaching of Missy’s grandmother Marie (Adriana Barraza), who helps them tap into their own inner hero to achieve their powers, so that they can then go into the alien’s mothership and save the planet.

The plot of We Can Be Heroes is rather formulaic if you’ve ever seen either a kids’ movie or a superhero movie. What makes the film stand out is the charm of the young cast. Rodriguez serves as cinematographer as well as director… and he REALLY likes the color purple. Fans of Sharkboy and Lavagirl may be disappointed as actor Taylor Lautner was not available for filming for Sharkboy and was instead replaced by stand-in body double J.J. Dashnaw and his face was hidden throughout. However, Taylor Dooley does return as Lavagirl. Despite all the famous faces playing The Heroics, it’s the kids who carry the movie, especially YaYa Gosselin. Each child gets a moment to use their powers in a great way to help save the day. The kids are also an incredibly diverse cast containing various races and ethnicities, including differently-abled actors as well.

Many moments are “cheesy,” but never feel “corny” as it’s just the right amount of fun. Guppy, who is Sharkboy and Lavagirl’s daughter does come across as too “kiddy” including having “baby talk,” but she is incredibly cute when doing so. Towards the end, there is a twist to tie everything neatly with a bow for a happy ending. Despite the formulaic plot, there are just enough hidden messages layered throughout the film to help deliver the theme of letting the younger generation come in to help fix the problems of the older one, and is incredibly fun at the same time.

We Can Be Heroes is currently available on Netflix