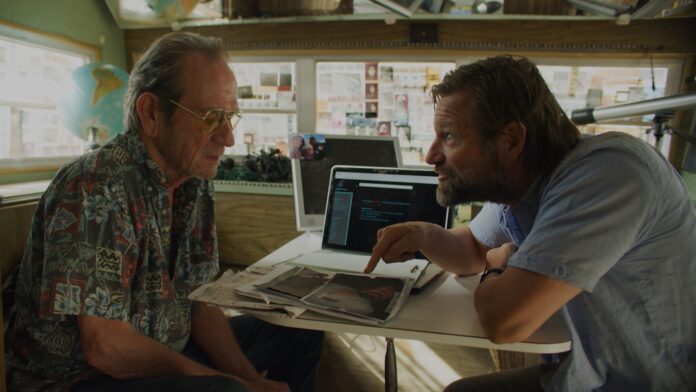 Conspiracy thriller movies can be a lot of fun in the right hands. They really don’t need to make a lot of sense, right, because anything can be spun to be part of the conspiracy. But also there’s a lot to chew on in playing a tinfoil hat-wearing character who is constantly looking over his shoulder. The best that can be said about Wander, the paranoia-fueled thriller from April Mullen (Dead Before Dawn 3D) is that it features Aaron Eckhart in an unhinged performance that feels right for our Pizzagate/Qanon/Trump2020 times.

Set in the isolated town of, yep, Wander, the film centers on Arthur Bretnik (Eckhart), a former cop now a private investigator whose life revolves around conspiracy theories. Indulging in the unknown is both a big part of his job, but he also hosts a radio show out in the middle of the desert with his equally off-the-rocker pal Jimmy Cleats. Cleats is played with great indulgence by Tommy Lee Jones, sporting a pair of Hunter S. Thompson shades, a variety of vacay shirts, and a string of rants boasting of chemtrails, Almagordo, the Illuminati, and “Big Brother.”

Mullen, whose dizzying camera isn’t for the faint of stomach or those prone to vertigo, sweeps Arthur into a shadowy plot involving secret surveillance, mysterious agents, and control chips that explode the chests of anyone who tries to leave Wander. It’s basically a confirmation of everything Arthur has ever believed, ever since tragedy took the life of his daughter and left his wife in a catatonic state.

The combination of Mullen’s frantic direction and Eckhart’s bugged-out, twitching, sweaty performance can be exhausting but is never dull. Jones is better, and more fully-realized, in his role as Cleats. At least he doesn’t seem to be doing a cheap caricature the way Eckhart does. Jones is basically playing an amped-up version of his embittered Billy Strannix character from Under Siege. Also in the cast are Katheryn Winnick as Elsa Viceroy, whose name should tell you that she’s somehow connected to this vast conspiracy, and Heather Graham as Arthur’s loyal lawyer friend who worries that he’s finally gone over the edge.

But has he? Or has Arthur been right all along? Mullen and screenwriter Tim Doiron root around for ways to make Wander feel politically relevant, but instead fall on cliches of the genre, done better in a myriad of other films. Worse, Eckhart’s droning narration removes what little mystery there is left to uncover.

Fortunately, this trip down the rabbit hole doesn’t linger for too long. Wander has some genuinely fun, crazy performances but any intrigue has been buried out in Area 51 somewhere.