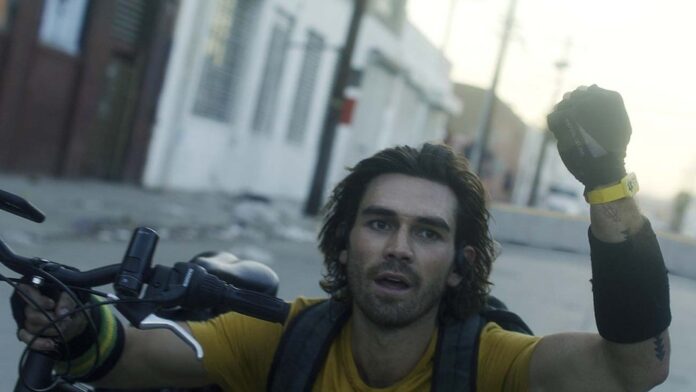 I’m not sure that what everyone struggling through the reality of this global pandemic was hoping for was another mediocre “thriller”. Let alone one that is trying to exploit the situation we all find ourselves in. Regardless of what anyone wants or may need, here comes Songbird. This dystopian tale takes a stab at the worst care scenario in the COVID-19 pandemic. We fast forward to Los Angeles in 2024. COVID has continued to mutate, targeting the brain and is now far more deadly. The virus, referred to as COVID-23, has essentially shut down the world. In an effort to contain COVID-23, Los Angeles has enacted numerous measures. The most treacherous of these being new q-zones that have been set up. 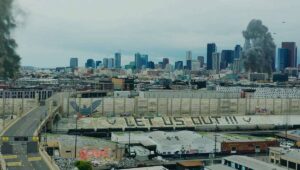 Q-zones are where anyone who is infected, or who has come in contact with an infected person, gets taken. They are essentially a death trap. ‘Munies’, who are fortunate enough to not be affected by the virus, serve as essential workers. One of the lucky few is Nico (K.J. Apa). Nico is a courier flying around town delivering packages on his bicycle working for Lester (Craig Robinson). Throughout the day he constantly facetimes with his girlfriend Sara (Sofia Carson). Sara and her grandma Lita (Elpidia Carrillo) are stuck to the confines of their apartment. Nico and Sara’s dreams of escaping the city together come to a crashing halt once Lita gets sick. 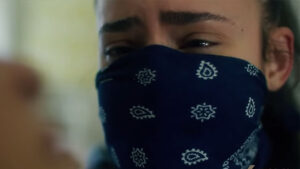 The main government agency in charge of controlling the spread of COVID-23 is the department of sanitation. Running the department is the maniacal Emmett Harland (Peter Stormare). Stormare plays the character perfectly, just bordering on the edge of absurdity. You could pluck Harland out of Songbird and place him seamlessly into a parody film and he wouldn’t miss a beat. Harland knows that Lita has contracted the virus and his team is on their way. Nico’s only hope is to find an immunity bracelet for Sara so they can get her out of the city. William (Bradley Whitford) and Piper Griffen (Demi Moore) have some shady business dealings and may be exactly who Nico needs. As Harland closes in, Nico races to save the woman he loves.

Songbird manages to squander a group of gifted stars. Writer/director Adam Mason and writer Simon Boyes simply don’t get enough out of the talent compiled for the film. The script leaves a lot to be desired and all of the characters are fairly one dimensional. There are moments that are so dumbfounding they just make you laugh. Songbird really excels when showing the audience the desolate world that Los Angeles has become. For instance the eerie quiet, overgrown foliage, barbaric conditions in certain areas, graffiti everywhere, and online influencers ruling the airwaves make an impression. A lot of what the film shows is conceivable. One the other hand, a large portion is too much of a reach and ruins the atmosphere Mason is trying to create. Michael Bay produces the film, but his involvement is not enough to turn Songbird into a viable thriller. 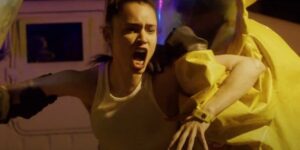 It was only a matter of time before we saw films focus on COVID. We knew it was bound to happen, and one had to be first. It just seems too soon for it, with the pandemic still raging out of control in the country. On top of that, the film isn’t a very memorable one. There are a few haunting images, but nothing that we haven’t seen before. Viewers may be equally unsettled by the horrors of a pandemic truly out of control and the horrors of a film that falls flat for a majority of it’s relatively short runtime. The characters are hard to connect to, and too many moments just leave you scratching your head. The best part of the film is Stormare, and that’s because his character fully embraces the absurdity. You can go ahead and pass on Songbird, you’re not missing much.