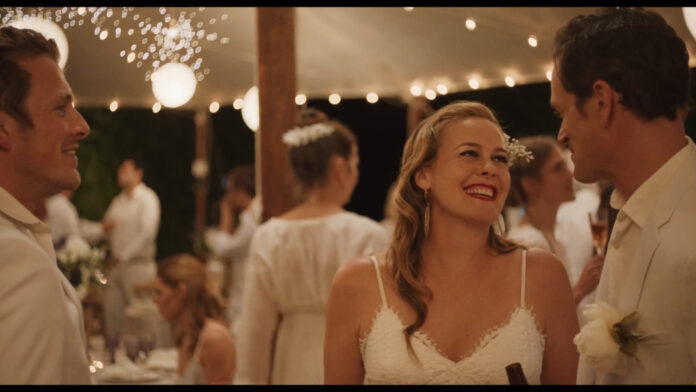 One of the best consequences of COVID is not having to see your family for the holidays. Sister of the Groom reminds us how lucky we are to skip a year. In Amy Miller Gross’ new film, Alicia Silverstone and Tom Everett Scott play a married couple returning to her family’s Hampton vacation home, now owned by her brother for his whirlwind wedding to a twenty-something French singer.

Silverstone’s Audrey is about to turn 40, and despite Scott’s Ethan still being attracted to her, her insecurities are high and meeting her gorgeous young and completely free and unapologetic future sister-in-law Clemence (Mathilde Ollivier) doesn’t alleviate her tension. Her brother Liam (Jake Hoffman) isn’t too understanding, disregarding Audrey’s feelings and inviting the future architect who is set to demolish and redesign the vacation house to the wedding. He just so happens to be Audrey’s ex-boyfriend. As the weekend goes on Audrey starts rethinking her identity and her past, in order to reconcile with her future.

Alicia Silverstone’s Audrey seems to line up pretty closely with the characters Silverstone has been playing more recently. Though this is her first starring role in a while, she plays a mother with her own insecurities that is very much impacted by everybody else around her. It’s not a confusing performance, so much so as Silverstone is given confusing dialogue to work with, that doesn’t make the most sense within her character arc. Playing her husband is another 90s superstar, Tom Everett Scott. Scott, who killed it in TruTV’s underrated and underseen I’m Sorry, makes the most of the character he is given. Scott’s performance overall plays foil to some of the more obnoxious characters, but as we’ve seen in some of his more recent work Scott works best with a strong comedic partner. Fortunately, he succeeds without one.

Despite a dependable and grounded performance from Tom Everett Scott, everybody else is unlikable. The rivalry between Silverstone’s Audrey and Mathilde Ollivier’s Clemence feels rushed and not as nuanced as it needs to be. Clemence is vindictive and rude and goes completely unchecked by her family. When Audrey is called out, it is taken way out of proportion. Continuous unrealistic character choices just don’t add anything to the narrative and don’t make any sense.

Sister of the Groom doesn’t really know what it is. Like Silverstone’s main character, the movie suffers from an identity crisis. When the cinematography reflects more of a European/French film style, the narrative gets more existential and the movie works. When it tries to be more of a straight comedy it flails.

Sister of the Groom is available in theaters, on digital and on demand. Watch the trailer below.