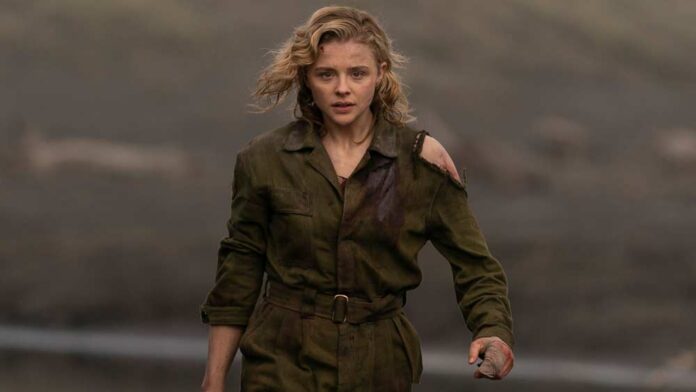 I have to admit to being of two minds when it comes to Shadow in the Cloud, a film of undeniable style, the ability to instill waves of claustrophobic fear, and a terrific lead performance by Chloe Grace Moretz.  On the other hand, it’s sloppy, tonally erratic, and has the unfortunate distinction of being the brainchild of toxic screenwriter Max Landis, who has seen his career hobbled, rightfully, by accusations of sexual, physical, and emotional abuse towards women. It would be easier to look past such things if Landis’ fingerprints weren’t all over this, despite the attempts by director Roseanne Liang to get some distance.

Landis, who previously-wrote such films as Chronicle, Bright, and Victor Frankenstein, is never short on good ideas. You could do worse than ripping off your own father’s Twilight Zone: The Movie episode “Nightmare at 20,000 Feet.” Shadow in the Cloud is another, centering on WWII flight officer Maude Garrett (Moretz) who boards a B-17 bomber, aptly named “The Fool’s Errand”, just before takeoff. She looks tired and a little scared, she’s carrying a mysterious, classified package. Her other arm is in a sling. She looks like she just got away from battle.

The battlefield might’ve been less harsh than the reception she receives on board. The all-male crew of sexist pigs dials up the obscene talk to eleven with an actual female nearby. In fact, one of them really says “Is that an actual girl?”, before the lot of them proceed to joke about who will get to fuck her first. This, I guess, is what our President would call “locker room talk”, but coming from Landis’ pen it’s especially tough to overlook. Maude takes it all in stride. She has a mission to accomplish.

Shadow in the Cloud is most effective in the early stages, when the threat is decidedly more down-to-Earth and human. The men stick Maude in the lower ball turret, evoking memories of the cramped gun battles in Memphis Belle, trapping her there while they continue to spew their vile comments. Liang makes the best use of the confined space, too, having Maude only able to communicate by radio and limiting her range of motion. It makes the presence of a creature, a gremlin, glimpsed on the wind all the more terrifying because there’s so little she can physically do. An ’80s-style synth score helps ratchet up the tension, as well, giving the film a pulp horror feel.

This would’ve been a more effective movie if it had kept its ambitions limited to the turret, or something similar. Once Maude escapes, and she teams with her heinous crewmen to actually fight the monster, it becomes clear the budget isn’t enough to sustain what Liang hopes to accomplish. Furthermore, the script is just plain stupid, with the men continuing to emphasize their baser instincts in the heat of battle, not just with the gremlin but against enemy fighter planes. The screenplay has been rewritten numerous times in an attempt to get away from Landis, but there’s no getting away from his usual tics. Moments of action have no weight to them and seem to happen at random, and few of the characters are even remotely realized, with the exception of Moretz’s Maude Garrett. Moretz is just too good of an actress to be dragged down by a screenplay that underserved her talents. The same can’t be said of her co-stars, which include talented folks like Nick Robinson, Callan Mulvey, Beulah Koale, and Taylor John Smith. Despite profile close-ups that act to enforce who these (mostly) awful men are, none of them make an impression.

Landis once made waves for attacking female protagonists, singling out Daisy Ridley in Star Wars and Amy Adams in Arrival, taking issue with their heroic qualities specifically in relation to their roles as women. Shadow in the Cloud marks the one time Landis wrote a movie with any kind of female perspective (no, Kristen Stewart in American Ultra doesn’t count), and despite Liang and Moretz’s best efforts it still feels that way. A rousing montage of archival footage featuring the real-life officers of the Women’s Auxiliary Air Force makes you wish Shadow in the Cloud had been about the challenges women truly faced, which was not a shoddy-looking gremlin.

‘Shadow In The Cloud’ Trailer: Chloe Grace Moretz Faces A Gremlin At 20,000 Feet

Review: ‘Strange But True’, A Talented Cast Can’t Save This Boring “Thriller”