Ip Man (Dennis To) is back in Ip Man: Kung Fu Master – the newest film about Bruce Lee’s famous trainer. This iteration focuses on a younger Ip Man in Foshan. Ip Man is a police captain who does all he can to uphold the law. He has a deep-rooted sense of honor that he tries to exhibit in his daily life. Ip knows that he must use his kung fu for good, and to protect those in need. This sense of honor and desire to help those combine to make for the perfect police captain.

The Axes are a local mob that are run by the ruthless San Ye. San Ye has his mob murder a man, so Ip Man must arrest him in the name of justice. When San Ye is killed, Ip Man quits the force and accuses Chief Yuan and the police of corruption. The new chairman of the chamber of commerce, Sasaki, is actually the corrupt one. Sasaki sets his focus on taking down Ip Man. Ip Man continues his pursuit of justice dressed as the vigilante Black Knight. Eventually the Japanese army, led by Tokugawa, come and set up a martial arts tournament. If only there was someone brave and talented enough to compete and bring honor to China…

Ip Man: Kung Fu Master is 83 minutes of fun. Sure, it is campy and ridiculous, but it seems that writer/director Liming Li and writer Qingshui Shi know this and have embraced it. Li goes all in with dramatic close ups, sweeping camera movement, and slow motion to give the viewers a hell of a ride. There is minor, mostly inconsequential, dialogue during the film which is essentially just a bridge until the next fight. Luckily none of these scenes are long and we get constant martial arts during the entire runtime. There is absolutely no character development, but with such a short run time and plenty of ass to kick – there wasn’t room for it. 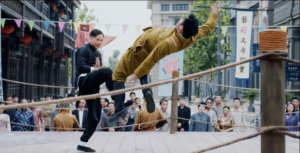 Li and Shi make sure to include comedic element as well. Ip Man’s uncle is always adding to the hilarity, constantly fighting in between chugging wine. They do try and add some serious moments. Most of these are unnecessary and fall flat, but a small handful have merit. That being said, very few people are watching an Ip Man movie for anything other than the martial arts. Good thing that is in no short supply here. We have the typical martial arts punching noises we’ve all grown to love and of course people flying through the air from one punch or kick. I haven’t seen the other Ip Man films, but I can say that this one lived up to the series’ hype. If you’re in the mood to turn your brain off and enjoy some classic martial arts entertainment, then look no further.