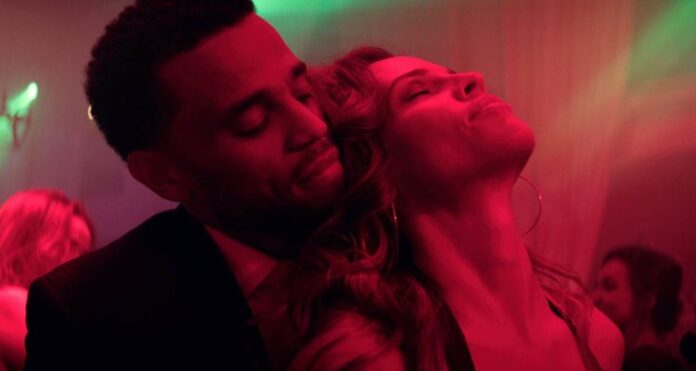 The erotic, jilted lover genre is well-worn, with most modern permutations rooted in the classic Fatal Attractions. That’s quite clearly evident in the title of Deon Taylor’s new thriller, Fatale, but it’s also a perfect descriptor of Hilary Swank’s dangerous antagonist, a femme fatale who uses every one of her powers, both sexual and legal, to entrap a successful black man played by Michael Ealy. And yes, that he’s black does play a role here, because the “evil white woman entraps black man” premise has become a sub-genre unto itself, appealing largely to African-American audiences. As far as those types of films go, Fatale is one of the better ones.

Ignore the trailers that suggest a straight-up scorned mistress angle, because there’s a lot more going on in Fatale, for better or worse. Ealy plays Derrick Taylor, a prominent L.A. sports agent whose business is booming with the signing of multiple A-list athletes, which I guess in this case includes former NBA player Lance Stephenson.

Derrick’s company is heating up, but at home things are pretty cold. His marriage to beautiful-but-distant wife Traci (Damaris Lewis) is in a rough patch, and she’s spending a lot of late nights entertaining real estate clients. Something is up, and Derrick wants to fix it. But first, a trip to Vegas with business partner Rafe (Mike Colter) as part of a bachelor party. The wild night gets out of hand, and Derrick finds himself under the bedsheets with Veronica (Swank), who latches on to him in a “hide your cellphone” kind of way.

Fatale then throws a few curveballs our way, some of them ludicrous but all of them highly entertaining. Derrick is nearly killed by an intruder into his home, and who should be leading the police investigation? Veronica.

This is one of those movies where you find yourself talking to the screen, giving voice to what the characters must be thinking at the moment. So when Veronica comes walking into Derrick and Traci’s bedroom, and his eyes grow to the size of sewer lids, I found myself going “Oh hell nah!”.

Veronica has Derrick by the nuts through most of Fatale, and part of the fun is watching him twist in the wind while she makes double-barreled remarks about his character…

Swank is particularly good in this role, and it’s something we’ve never had a chance to see her play. Sexy, exotic roles have never been Swank’s calling. Nor have we seen her play someone as devious as this before. To her credit, Swank really leans into it and elevates the character further than it probably deserves. Veronica is a complex figure; she has beef with her slimy ex-husband (Danny Pino), a power player who has full custody of their child. The anger she feels towards him gets misdirected at Derrick and evolves into resentment for the way he treated her in Vegas.

Rather than simply follow as Veronica makes Derrick’s life miserable, Fatale veers wildly in ridiculous fashion. A larger scheme unfolds that finds her ensnaring Derrick in a tit-for-tat murder plot of Agatha Christie proportions. The body count piles up, and so do the absurd number of twists, with each attempting to outdo the last. At some point you just have to throw your hands up in the air and roll with it, or not.

In these movies, the black dude is always portrayed as masculine in the office but passive personally, which opens the door to his easy manipulation by a white temptress. Derrick is no different, and to be honest, Ealy is very well-versed in exactly this kind of role and this kind of film.  The payoff is when he finally grows a spine and starts taking control of his life, but if I’m completely honest Derrick is so bland that I was actually rooting for Veronica to keep out-maneuvering him. She’s just so much more interesting, and I wanted to see her story continue.

Taylor has been on a hot streak lately with these mid-budget, slightly unsavory, racially-charged thrillers. He directed The Intruder, which had Ealy being terrorized by another unhinged white person, played by Dennis Quad. There was also the cop flick Black & Blue, which dealt with tension among black officers in the police force. If anything, Taylor knows his audience, he knows how to push the right buttons, and his films are never dull. Fatale is definitely a guilty pleasure, so I guess someone better cuff me.