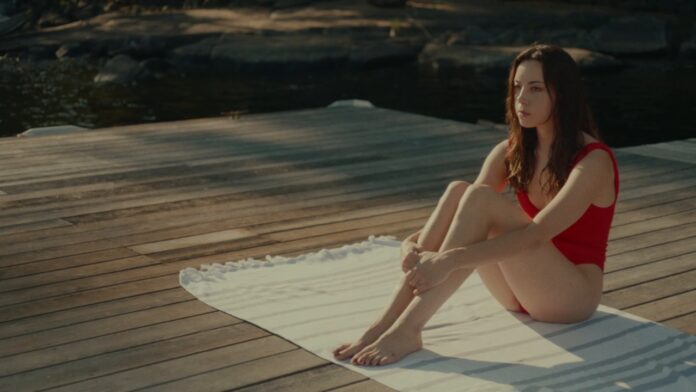 I don’t know if there’s been a movie more suited to Sundance’s NEXT lineup than Black Bear, a rip-roaring, razor-sharp comedy about toxic relationships and modern filmmaking. A sort-of Cabin in the Woods for romantic-horrors, it defies easy description and that makes it all the more fun. You never have any idea what in the shit is truly happening, but you do know that a literal black bear has something…SOMETHING, to do with it.

Not quite a cabin in the woods, but a ritzy resort home in the mountains is where Black Bear takes place. It’s one of those places that is perfect for either a serial killing or a really bad break-up. We’re not quite sure which we’re going to get, but we’re certain it’s going to be one of them. Broken up into two diametrically-opposed chapters, Black Bear begins with the introduction of indie filmmaker Allison, who makes “unsuccessful, small movies” nobody has ever heard of. She’s visiting the home ostensibly to find new inspiration. The place is run by the comically mismatched couple Gabe (Christopher Abbott) and his pregnant girlfriend Blair (Sarah Gadon). Their first encounter as a trio is hilariously combative, with the script by writer/director Lawrence Michael Levine (husband to Black Christmas director Sophia Takal) teasing betrayals, reconciliations, insta-friendships, more betrayals. Gabe and Blair can barely seem to stand one another; she casually insults him at every turn (‘It’s good to talk to a genuine artist”, she says, ignoring that Gabe is a musician), then plays him off Allison so she can tear him down for it later. Gabe’s not much better; he’s braggadocious, stubborn, and too flirty; knowing just how far to go to piss off his hormonal companion while still feigning ignorance of the situation. And then there’s Allison, who is content to go with the flow, siding with whoever gets her through the next moment unscathed.

If all Black Bear had going for it was these three sniping at one another, it would still be terrific. Levine’s script takes a scalpel to feminism, toxic masculinity, and more with a wit that is rarely seen. He’s aided by three actors in Plaza, Abbott, and Gadon who are able to shift on a dime to keep up with all of Levine’s narrative twists. Suffice it to say, this is no simple relationship comedy and none of the actors are allowed to stay on the same wavelength for more than a few minutes. And all of that comes before the second chapter arrives and flips the script in ways that are too good to be spoiled here, but introduces a whole meta aspect that makes you reevaluate what had been previously experienced.

What does it all amount to? The Hell if I know, and it doesn’t even seem to matter. Maybe Levine is drawing a connection between creative genius and madness, in particular for those in romantic entanglements? Who knows? Black Bear is smart, maybe too smart, and such an emotionally-heightened mind trip you might feel right at home with the titular creature poking its nose where it doesn’t belong.

Sundance Review: ‘On The Count Of Three’