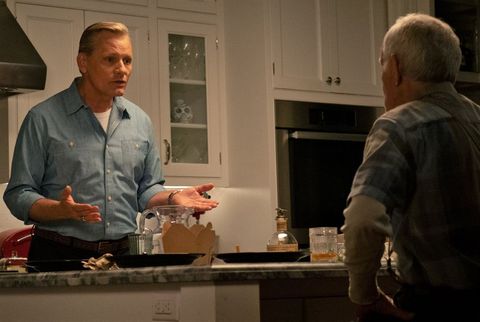 When Viggo Mortensen decided to make his directorial debut with the father/son drama Falling, he didn’t decide to make it easy on himself. Mortensen not only got behind the camera, but he wrote the screenplay, starred, and composed the score. That’s the kind of dedication that not only gets you a prominent premiere at Sundance (where I quite liked it), but slotted for the awards season.

In Falling, Mortensen offers veteran actor Lance Henriksen the best dramatic role of his career, playing a conservative father in the beginning stages of dementia. Mortensen plays his gay son, who has endured his father’s disgust all of his life, but braves it in order to take care of the old guy.

Also in the cast are Laura Linney, Sverrir Gudnason, and Terry Chen.

SYNOPSIS: FALLING follows John (Viggo Mortensen) who lives with his partner, Eric (Terry Chen), and their daughter, Mónica (Gabby Velis), in California, far from the traditional rural life he left behind years ago, while his conservative father, Willis (Lance Henriksen), lives alone on the isolated farm where John grew up. In the early stages of dementia, Willis is brought to John’s California home to help him relocate. Unfortunately, their best intentions ultimately run up against Willis’s adamant refusal to change his way of life in the slightest.