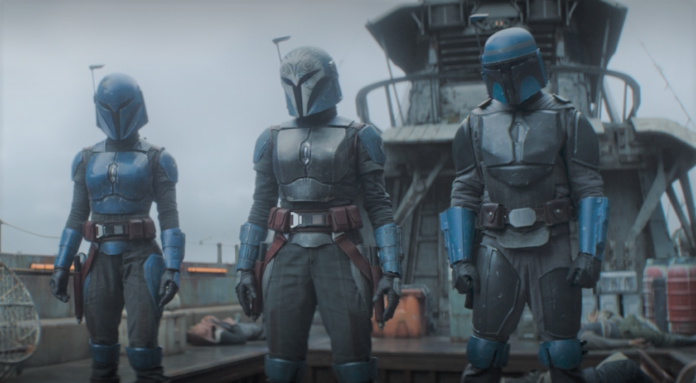 Finally! An episode of The Mandalorian so good I immediately watched it a second time. I popped so hard for some of the stuff this week that it may have woken up my neighbors. Oops. Blame Jon Favreau!

I knew this episode, titled The Heiress, was going to be fire because the preview image featured WWE superstar Sasha Banks looking all mysterious in a hooded robe. It doesn’t disappoint. The Western vibe of the last couple of episodes is replaced by a lot of adventures on the high seas, but what this really boils down to is something I’ve been saying all along. This season rise or fail based on the most anticipated reveals, and just as with Cobb Vanth in the season premiere, we are not let down.

Continuing from last week, the Frog Lady has not had all of her precious eggs devoured by The Child, although he remains very interested in doing so. Din Djarin aka Mando is escorting her to the water planet Trask, aboard a very shaky Razor Crest. After a splash down on the planet, Mando pays a Mon Calamari, one of the two main species on the planet along with the Quarren, to repair the ship. Once Frog Lady is reconnected with her husband, he points our hero to someone who can help him find other Mandalorian. The goal, as always, is that Mando can use their help to find the Jedi and find a home for The Child. During this time, Mando is being eyed from the docks by said hooded figured.

Taken aboard a Quarren fisherman’s vessel, the seemingly-friendly captain waves Mando and the Child over to a creature they’ve captured. Only it’s a double-cross and The Child is swatted into the creatures gaping maw (!!!), with Mando leaping in after it. That damn beskar metal! It’s what they’re after, and surely they were about to get it until suddenly three blue-armored Mandalorians swoop in and save the day.

This was the first time I whooped like I was at a damn pep rally. The Mandalorians swab the decks with the fishermen, with one of them diving in to rescue The Child, whose protective orb has been destroyed but he is safe inside.

Serious love to The Clone Wars and Star Wars Rebels is about to be shown, and a number of loose ends begun to tie-up. Mando thanks the three Mandalorians and says he has been looking for them. But when they remove their helmets he’s stunned because, y’know, that’s NOT THE WAY. The trio consist of Sasha Banks as Koska Reeves, Simon Kassianides as Axe Woves, and most important of all, Katee Sackhoff as Bo-Katan Kryze.

Without giving away everything Kryze says, she explains the differences between her clan of Mandalorians and that of Din Djarin’s, which seeks to return to the old ways. This in part, helps clear up why Din Djarin, Boba Fett, and Jango Fett, seem so different. But she also knows how to find  Jedi. Of course, she’ll need Mando’s help before she can tell him where.

So in a way we’re getting the same “you help me, we’ll help you” formula that has been this series’ trademark, backed by the force of new character motivations that feed into existing storylines. Kryze is looking for something taken from her, something she needs in order to rule as the Mand’alor , and you can guess what that thing is: the Darksaber, which we know is held by Moff Gideon (Giancarlo Esposito).

I wasn’t ready for how perfect Sackhoff was as Kryze. Not only was she sporting the same red hairstyle, but she just captures Kryze’s fearless, win-at-any-costs attitude. True to form, she isn’t totally upfront with Mando about her true intentions, and the assault on the ship briefly goes sideways. But before it does, there are some funny bits between the ship commander, played in a surprising cameo by The Town and Argo actor Titus Welliver (Whoop number three!), and Moff Gideon who is unconcerned they are being attacked by a pack of Mandalorians.

After stopping the ship from crashing, Mando and Bo-Katan settle up. She knows Gideon has the Darksaber, so her job is finished for now. But she informs Mando that if he wants to find a Jedi, she knows he can find one in the city of Kaladan on the forest planet of Corvus. Who is this Jedi?

This episode was directed by Bryce Dallas Howard, who you may recall had one of my least favorite episodes from the prior season. Not that it was bad, just slower and less focused than the rest. But here she’s totally on point, especially as there’s so much action to juggle of differing types.

This is unquestionably my favorite episode across the two seasons, and a big part of that is Favreau making some deep cuts into Star Wars lore. In about 36 minutes he picks up on major storyline threads connecting the original trilogy, Star Wars Rebels, and The Clone Wars, and does it in a way that doesn’t bog you down in Mandalorian exposition. To be fair, I would’ve been okay if it did that, too, but that Favreau is so efficient and effective only makes this episode better.

And now we’re deep into what fans have been aching for most out of The Mandalorian season 2, and I don’t know if we’re ready for it. Ahsoka Tano. Damn. Next week can’t get here soon enough.