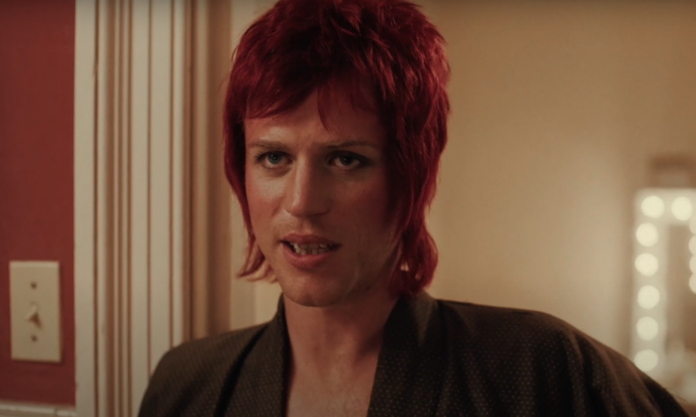 David Bowie famously stated that he would never allow a biopic to be made about his life. While the icon couldn’t keep Hollywood from doing its thing, it could keep it from using his music. The new film Stardust chronicles Bowie’s journey from David Jones to Ziggy Stardust, working within the confines of not breaking copyright. The resulting film works surprisingly well, relying on strong performances and filmmaking ingenuity.

Set after the release of his first album and minor success in England, David Bowie (Johnny Flynn) is determined to seek out fame in America, even though the record was a flop on the US charts. Taking him on this promotional tour is Ron Oberman (Marc Maron), a chatty promoter with mediocre connections. With smaller crowds and less than stellar gigs, Bowie is learning to handle his disappointment while juggling his fear of turning into his schizophrenic brother, Terry. Struggling to interact with press and who he is as an artist, Bowie’s road trip brings him more than self-discovery. It brings him a whole new identity.

Stardust doesn’t feel like a David Bowie biopic. Working better as a road trip movie, director Gabriel Range succeeds in making Bowie’s personal struggles emotionally accessible. Though the film would do much better with Bowie’s music playing on the soundtrack, his estate has made sure that no such movie will ever be made per Bowie’s request. Taking elements from Bowie’s life, (i.e his fear of his family’s mental illness, his desire for fame) and reconfiguring them into fiction à la The Rose, might have been a better use of the storyline. While Velvet Goldmine kind of already did this with Bowie’s relationship with Iggy Pop, the idea that everyone is afraid of turning into the worst of their family is something everyone struggles with.

Even though Stardust does not use any of Bowie’s music, it feels like it does. Composer Anne Nikitin uses notes and rhythms that sound like his music, without breaking copyright law. Filling in the gaps, Flynn performs covers Bowie was known for playing at the time of this particular American tour. Instead of feeling cheap or like a parody, Nikitin’s score feels very cerebral and in bedded into the DNA of this film. In a movie about where David Jones is not quite David Bowie yet, it makes sense narratively that the music would not be David Bowie’s music.

It’s hard to place someone early in their career, struggling with confidence and identity, when that figure is known for their over-the-top personality, confidence, and ownership of their identity. While Johnny Flynn captures the look and sound of the rock icon, at times he doesn’t feel like David Bowie. That might not necessarily the actor’s fault. It could be the script or that IFC is making a movie about David Bowie without any of his music, but what he does capture is still captivating and moving. It just doesn’t always feel like David Bowie.

While Mark Maren will be playing the grumpy producer role for a very long time, he certainly knows how to get the most out of that role. Commanding, yet funny and understated, Maron grounds the drama of Stardust, balancing out Range’s surreal visuals and Flynn’s ethereal David.

Stardust isn’t a bad movie. Its visuals, performances, and editing are what save it from its lack of resources. While Bohemian Rhapsody or Rocket Man soar as large narrative and financial spectacles, Stardust works because it is a smaller, more contained story.