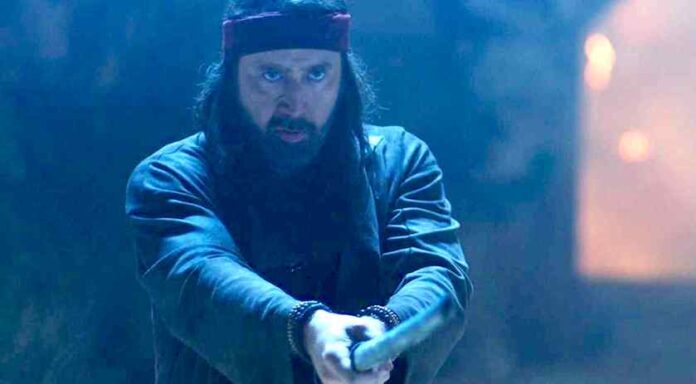 If nothing else, Jiu Jitsu deserves credit for not being another boring car chases ‘n big explosions action flick. Guaranteed there aren’t a ton of Nicolas Cage as jiu jitsu warrior battling aliens movies around, although I’d be happy if there were. By no means does the insane premise and Cage’s madman antics let writer/director Dimitri Logothetis off for everything, but they certainly do help.

Part Jason Bourne, part Predator with a dash of Mortal Kombat,  there’s a lot of shit to really dig about Jiu Jitsu. It’s one of those films that is so insane, with Logothetis coming up with so many batshit ideas that you just sorta go with it…or choose not to. But who doesn’t want to at least check out a movie about an alien warrior named Brax who shows up on Earth every six years for mortal combat against our finest fighters. And if we choose not to fight him, he destroys everything. It’s basically the Predator setup with a dose of Kickboxer thrown in, which is fitting because Kickboxer star Alain Moussi is in the house, too.

Moussi plays Jake Barnes, who is recovered on a Burmese shipping boat after a harrowing escape. But he wakes up amnesiac, unaware that he’s this all-mighty jiu jitsu warrior destined to battle Brax and save humanity.  The 100‘s Marie Avgeropoulos is a covert operative leading a team investigating the strange occurrences around Brax’s visits. Her attempts to interrogate Jake don’t lead anywhere, as he’s rescued by Keung (martial arts royalty Tony Jaa) who reunites him with the rest of the group meant to battle Brax. Part of that team is Harrigan (Frank Grillo), a grizzled soldier with a no-nonsense attitude. Juju Chan is Carmen, who apparently had some sort of love connection with Jake that he now can’t remember.

The team needs to investigate some weirdness at a temple in Burma (this must be pre-Myanmar?), but to do that they’ll need to cross the dangerous jungle terrain, and that gives Brax his chance to strike. This is where the film really goes into Predator mode, as Brax hunts them down and engages in various forms of combat. He even sees using a form of infrared, and sees his prey as trophies of victory. This is actually also where Jiu Jitsu is at its coolest. Brax, who we learn arrived many years in the past and taught humanity how to fight, uses a combination of styles and so do his opponents. Fight choreography is top notch and Logothetis casts stars who can hold their own with Moussi and Jaa.

Cage doesn’t fully arrive on the scene until about 40 minutes in, taking on the role of Wylie, a bonkers Yoda-like dude who makes newspaper hats and spouts Chinese proverbs as nonsequitors. While not as fully unhinged as he probably should’ve been, Cage brings enough weird gonzo antics to add a much-needed dose of humor. Still, this movie is being sold as basically the “Nicolas Cage kung fu movie” and there’s precious little of him doing much other than saying things that don’t make sense.

That said, Wylie’s presence brings with it much of the lore surrounding Brax. Wylie has been around the block with Brax, as well, and knows a thing or two about what Jake is going through. Logothetis really digs into the myth-making here, putting a lot of effort into the world-building aspect and it pays off in making Brax feel like a formidable, unstoppable threat.

“I am you!”, Wylie shouts to the still-confused warrior, and at first we have no idea what he’s babbling about. But there are secrets to be revealed and a lot to learn about Jake’s connection to Brax.

For the most part, however, when there isn’t a deathmatch going on, Jiu Jitsu is bogged down by loads of exposition and poorly staged dramatic sequences. Moussi and Cage are decent enough actors to get by, but the rest…well, not so much. Even Grillo seems to struggle with the little bit that he’s given to do. But he’s not alone; none of the characters are particularly interesting and that is especially true of Jake who seems like a footnote in his own story. I get that he’s meant to be a blank slate, but he doesn’t have to be a boring one

Visual effects are a problem, as well. You can tell more time was spent coming up with Brax’s backstory than his bland robotic appearance, with a face that looks like it was mapped onto his helmet like early polygonal video games. Digital effects are as shaky as the martial arts choreography is impressive, which sorta makes you wish this were just a typical fighting flick. Maybe then Logothetis would’ve kept a steadier hand behind the camera, because for some reason he chooses to switch perspectives on the fly for no apparent reason, which is disorienting as Hell. He flips the camera angles so randomly in mid-fight that it can take you out of the moment. These are cheap gimmicks he’s never needed before and hopefully they’re just a momentary lapse in judgement because they take away from his actors who are more than capable of delivering kickass action.

Jiu Jitsu ends with a final showdown between Jake and Brax that leaves a lot of questions unanswered, as if the plan was always to turn this into a franchise. I’d be down for that, but if there is to be a Jiu Jitsu 2 it needs to fully tap into the wackiness of the concept and  embrace its genre mashup messiness because that’s what we all signed up for. Really bring it!