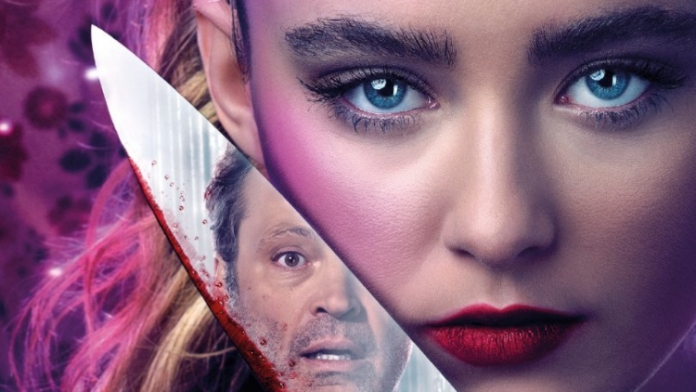 Nobody makes horror movies fun quite like Christopher Landon. The Paranormal Activity filmmaker leapt from those found-footage flicks into lighter genre fare with Scouts Guide to the Zombie Apocalypse, but it was his pair of Happy Death Day films that solidified his spot as the go-to-guy for black comedy. And now he’s back with Freaky, which like Happy Death Day takes a familiar comic premise, the body-swapping of Freaky Friday, and combines with the slasher style of Friday the 13th. The result is a fast-paced, funny, and VERY gory thrill that may be the most enjoyable horror this year.

Stealing a page from Scream and other slasher classics, a group of frisky teens are sitting around talking about the Blissfield Butcher, a mythical killer who has apparently been around for decades, but none of them actually believe exists. Until it’s too late, of course. The Butcher, a towering, imposing figure played by the towering, imposing Vince Vaugh, proceeds to slice and dice the kids up, stealing a mask (any good slasher needs one) and an ancient tribal dagger.

Detective Pikachu‘s Kathryn Newton plays Millie, a shy, book smart teen who gets bullied by the other girls in school. But all Millie wants is to apply to colleges and get out of town, away from memories of her recently-deceased father, and other troubles she’d like to leave behind. Her mother is caring and protective, but an alcoholic, and her older sister (Dana Drori) is an overbearing police officer. A good indication of Freaky‘s perfectly-sophomoric humor finds Millie dressed as the school mascot, a giant beaver, because who doesn’t love a good beaver joke? It gets even better when she’s forced to flee awkwardly from The Butcher, who stabs her with the dagger imbued with magical powers that causes them to swap bodies.

Fortunately, Landon doesn’t get bogged down in the dagger’s origins. It’s straight into the trickiness of having a psychotic male serial killer in the body of an attractive teen girl. This dynamic turns out to be far more interesting than its opposite, as The Butcher in Millie’s form is more confident, bolder, sexier, and even deadlier, trading on the power being a hot white girl affords him. On the flip side, Millie learns that having a penis is pretty cool (Seriously), having balls sucks (Seriously), and that white men really do get all of the attention.  There’s a chance for Landon to explore these gender roles more fully, but he chooses to largely play them for laughs, of which there are many.

Something else there’s plenty of? Murder. Landon goes out of his way to come up with some truly grizzly kills, enough that the film’s R-rating seems a bit light. The grossest murders, such as one using a buzzsaw, are saved for those who have plagued Millie the most, proving that bullies always get what they deserve.

There aren’t many actors with Vaughn’s physical stature, and as the killer he carries enough menace to be a legit star of his own horror franchise. However, he’s a lot scarier when acting like a silly teenage girl, dancing around like a cheerleader and making flirty eyes with Booker (Uriah Shelton), the boy Millie’s got a crush on. Newton’s transformation calls for her to carry a lot more arrogance, to flash a devilish smirk, and to show the attitude of a lot of toxic men. In strange circumstances, both also show moments of vulnerability, like a scene where Vaughn acting as Millie, has to come face-to-face with her mother’s loneliness. I’d still rather see Vaughn in bruiser roles like Brawl in Cell Block 99 but for the occasional one-off he’s very good here, too.

Outside of Vaughn and Newton the supporting cast leaves much to be desired. It’s not exactly the fault of the actors, but the stereotype roles they’re saddled with. Celeste O’Connor, who was such a breakout in Sela and the Spades, gets pigeonholed into a very limited brainy sidekick role. Misha Osherovich grows tiresome quick as Josh, Millie’s fabulously gay friend.

Freaky is closer to Happy Death Day 2U in that it leans heavier on laughs, but there’s definitely enough carnage if that’s what you’re looking for this Friday the 13th.

‘Happy Death Day 3’: Christopher Landon Says Sequel Could Happen With “A Truckload Of Cash” Or A Streaming Option