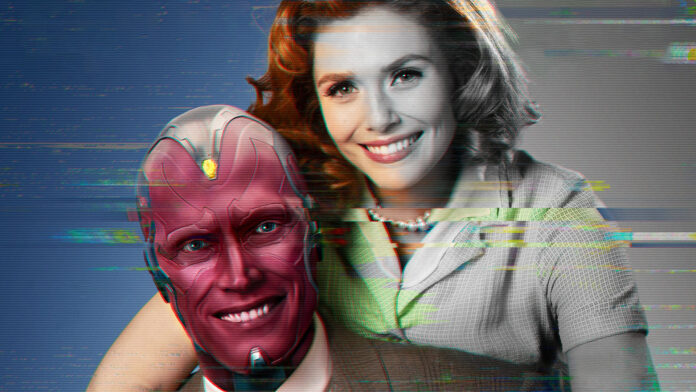 From the beginning, we’ve known that WandaVision would be set in a TV sitcom-style world, possibly of Wanda’s own creation. It was a pretty cool idea, one that would allow her to create a happy life she always envisioned with Vision, who as far as we know is still deceased. But it wasn’t until the trailer arrived that we saw how deep the sitcom premise was going, as multiple eras of TV are being represented, from the ’50s up to the ’80s at least. And now we know thanks to a story in EW that Marvel’s push to authentically recreate those eras went pretty far.

WandaVision reunites Elizabeth Olsen and Paul Bettany as Wanda Maximoff and Vision, the oddball lovers who were tragically split by Thanos in Avengers: Infinity War. Now they exist in an idyllic sitcom suburb, with the first episode shot in black-and-white and filmed in front of a live studio audience, just like the comedies of yesteryear.

“The show is a love letter to the golden age of television,” said head writer Jac Schaeffer. “We’re paying tribute and honoring all of these incredible shows and people who came before us, [but] we’re also trying to blaze new territory.”

“We find Wanda and Vision living a blissful suburban existence, trying to keep their powers under wraps,” Schaeffer added.

Marvel chief Kevin Feige takes some credit for inspiring the series, based on his need to get away from reality and escape to a simpler time…

“I would get ready for the day and watch some old sitcom because I couldn’t take the news anymore,” Feige said. “Getting ready to go to set over the last few years, I kept thinking of how influential these programs were on our society and on myself, and how certainly I was using it as an escape from reality where things could be tied up in a nice bow in 30 minutes.”

Kat Dennings Unsure Of A Return For ‘Thor: Love & Thunder’