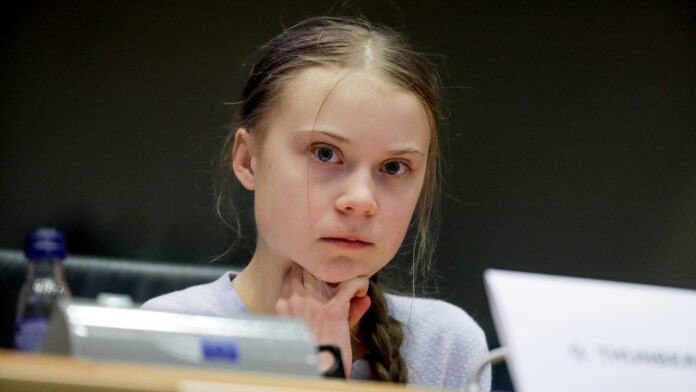 Oscar Wilde said that ”The public is wonderfully tolerant. It forgives everything except genius.” You can debate whether or not climate change activist and Swedish teenager Greta Thunberg falls into the genius category, but it’s hard to deny the emotion and passion she has stirred around the world since calling out UN leaders for their lack of urgency regarding climate change. Her anger and delivery of the dire consequences possibly awaiting us,  accompanied by her diagnosis of Asperger syndrome has garnered a lot of criticism and fanfare from people on both the right and left sides of the political spectrum. Documentarian Nathan Grossman gives us an exclusive and in-depth look at the activist in I Am Greta, reminding us that Thunberg isn’t our climate change superhero, but a human being.

While I Am Greta is a documentary, it’s also an in-depth character study. We see her Asperger’s diagnosis keep her from connecting with her peers. We also see her care very deeply about our future on this planet. While some will watch this documentary and use it against her to justify claims that she is “hysterical” or “mentally ill,” the documentary points out that her Asperger’s and passion for climate reform can co-exist and even inform the other. To paraphrase a line from the TV show Fleabag, Greta cares more deeply about the climate than anyone. That’s why she finds it all so painful.

Touching upon larger themes of celebrity and performative activism, I Am Greta examines the massive responsibility we are leaving younger generations by politically placating and gaslighting them on the issues that are going to most affect them. You are reminded over and over again that she is just a kid. From fiddling with her hair, to the stuffed animals on her bed, to how much smaller she is to her fellow youth climate activists. To personally take on this mammoth issue, to create massive change, is a huge responsibility and weight for a 15, currently 17, year-old kid.

Director Nathan Grossman, doesn’t shy away from his subject’s more socially awkward moments and outbursts. There’s a scene where she has been protesting for hours and is refusing to eat or drink anything. A few scenes later, she tells her mom that she doesn’t like to eat in front of others. Grossman takes sensitive subject matter and doesn’t explain it, letting Greta eventually explain it herself.

It is worth noting that while her relationship with her dad is highlighted, very little screen time is devoted to her other family members.  At times you feel the anxiety coming off of her, that you are getting an exclusive look at one of the world’s most influential people. At other times, you feel like the camera is being kept at arm’s length. Grossman is extremely respectful to Greta and her family. Her parents, Svante and Malena, obviously had a huge say in what did and didn’t get filmed. While the need to see deeper into her family life is there, the implication of violating that would be sacrificing the privacy of a child who already spends so much time and energy in the spotlight.

I Am Greta is a moving and urgent piece of documentary filmmaking. It very well could be the year’s Oscar winner for best documentary. However, the film’s unsettling aftertaste is a reminder that there is so much more to question and so much left to be done in order to protect and save the next generation, whether it be from climate change or ourselves.

I Am Greta premieres on Hulu on November 13th. Watch the trailer below.