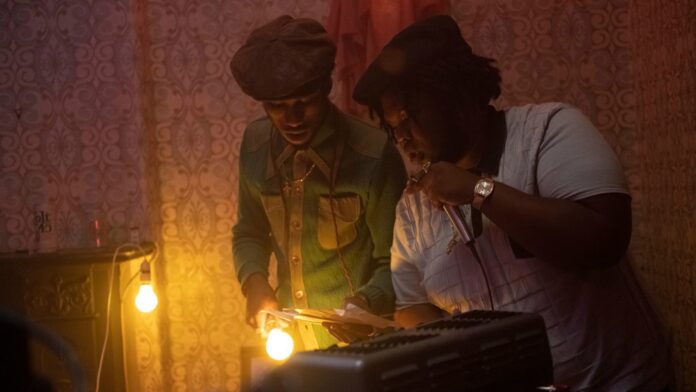 Steve McQueen’s Small Axe anthology films are beginning to be revealed to the world. Last night saw the U.K. premiere of Mangrove (starring Letitia Wright), kicking off the series which tells stories of London’s West Indian community from the ’60s to the ’80s. That film hits Amazon Prime this weekend, and the next one to follow is Lovers Rock, arriving a week later.

As seen in the trailer, Lovers Rock is a love story set against the backdrop of a dance party in 1980. The title comes from the reggae sound that sparked romance to the Black youths growing up in London.

SYNOPSIS: Lovers Rock tells a fictional story of young love at a Blues party in 1980. The film is an ode to the romantic reggae genre called “Lovers Rock” and to the Black youth who found freedom and love in its sound in London house parties, when they were unwelcome in white nightclubs. Amarah-Jae St. Aubyn makes her screen debut opposite the BAFTAs 2020 Rising Star award recipient Micheal Ward (Top Boy). Shaniqua Okwok (Boys), Kedar Williams-Stirling (Sex Education), Ellis George (Dr. Who), Alexander James-Blake (Top Boy), and Kadeem Ramsay (Blue Story) also star, as well as Francis Lovehall and Daniel Francis-Swaby who make their screen debuts. Lovers Rock was co-written by Courttia Newland and Steve McQueen.

‘Education’ Trailer: Steve McQueen Wraps Up “Small Axe” With A Look At Systemic Racism In The Classroom