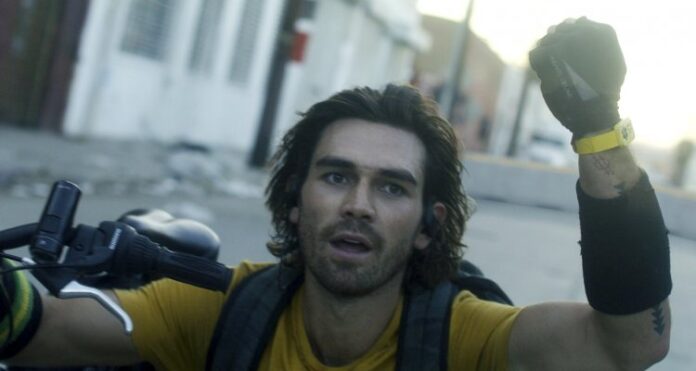 There are going to be a lot of movies about the pandemic, ya’ll. That’s to be expected; this is a once-in-a-lifetime event that we will be feeling the impact from for generations. Of course, every filmmaker wants to put their stamp on this moment in time. But you’re also going to see a lot of films touted as being shot during the pandemic, and one that we caught wind of earlier this year was Songbird, which is notable for being produced by Michael Bay. Today brings the first look at KJ Apa in the film, a dark reflection of our current reality.

Songbird takes place a few years in the future when COVID has mutated to a more lethal strain that kills 50% of those it infects. The quarantine many of us are experiencing now has extended for four years and only grown more restrictive. In this bleak scenario, two people connect and fall in love, with KJ Apa’s character risking everything to be reunited with her.

The film was shot by writer/director Adam Mason over 17 days during the lockdown (one person on set says safety protocols were thrown out the window), which may sound restricting to the gathering of an A+ cast. However, Mason managed to pull together Sofia Carson, Demi Moore, Craig Robinson, Alexandra Daddario, Bradley Whitford, Paul Walter Hauser, Lia McHugh, and Peter Stormare. Damn.

No release date has been set for Songbird, but with the release of these images and the story’s timely nature, expect that to change very soon. [EW]