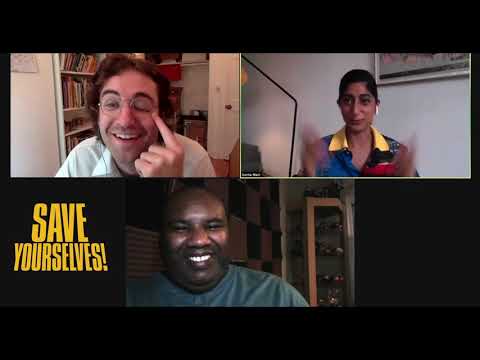 If you’re like me, unplugging from social media, even for an hour, is a scary thing. We all have that feeling if we turn off our devices that’s exactly when something incredible will happen and we’ll be the ones to miss it. It keeps us hooked. Well, in the hilarious sci-fi comedy Save Yourselves! that’s exactly what happens to a tech-obsessed couple played by GLOW star Sanita Mani and Search Party‘s John Paul Reynolds, who are the last to know of an alien invasion by seemingly harmless pouffes!

The film debuted this year at Sundance, and it was one of those screenings I attended on a whim. In the past, such excursions have often fallen flat, but not this time. The gamble more than paid off, with this being one of the most enjoyable experiences I’ve had at the festival.

I had a chance to speak with Mani, Reynolds, plus writers/directors Alex Huston Fischer and Eleanor Wilson about Save Yourselves!, how the film came together, its many influences, and more.  The film is in theaters and on digital right now! Check out my review here and my interviews below.

‘Save Yourselves!’ Retro Trailer Teases A Pouffe Invasion