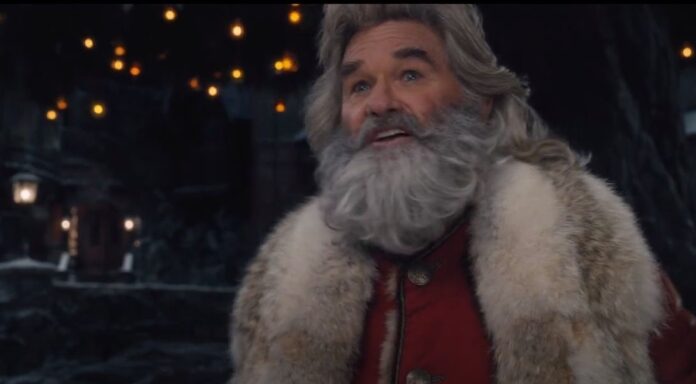 Netflix’s trailer for The Christmas Chronicles 2 is here and the only thing it left me wanting was for it to release on November 1st. It’s hard not to put away all things Halloween and start getting into the Christmas spirit with Kurt Russel’s jolly ole’ St. Nick staring you down. If I said in 1988 “You know Snake Plissken? Yeah, he’s going to make an awesome Santa Clause one day” I would have gotten laughed out of the sock hop…or wherever people congregated in the 80s…I was eight, I don’t know. Anywho, real-life Hollywood love story Kurt Russel and Goldie Hawn reprise their roles as Mr. and Mrs. Clause from 2018’s original Netflix holiday film called, you guessed it The Christmas Chronicles This time around they have to stop Belsnickle, played by Deadpool 2‘s breakout star Julian Dennison, from stealing the Christmas Star. This trailer is signifies everything you want out of a good family Christmas movie, COMPLETE yuletide ambiance, silly laughs, a little action and an actor in the red suit that helps you believe there’s someone out there that’s just that pure.

Check out the trailer below and look for The Christmas Chronicles 2 on Netflix, November 25th, 2020.

Official Synopsis:
It’s been two years since siblings Kate (Darby Camp) and Teddy Pierce (Judah Lewis) saved Christmas, and a lot has changed. Kate, now a cynical teenager, is reluctantly spending Christmas in Cancun with her mom’s new boyfriend and his son Jack (Jahzir Bruno). Unwilling to accept this new version of her family, Kate decides to run away. But when a mysterious, magical troublemaker named Belsnickel threatens to destroy the North Pole and end Christmas for good, Kate and Jack are unexpectedly pulled into a new adventure with Santa Claus (Kurt Russell). Written and directed by Chris Columbus (Home Alone, Harry Potter) and co-starring Goldie Hawn, THE CHRISTMAS CHRONICLES 2 is an action-packed adventure for the whole family that’s full of heart, humor, and holiday spirit.