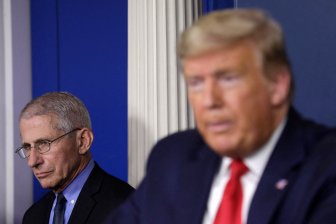 As the current occupant of the White House, who himself has contracted COVID-19, parades himself in front of his supporters claiming to be “immune”, Alex Gibney’s grateful documentary Totally Under Control exposes Trump’s utter failure in containing the virus. The film, put together with jackrabbit speed by Gibney and co-directors Ophelia Harutyunyan, and Suzanne Hillinger, is so on top of the pandemic that it even includes a postscript about the President’s diagnosis. You’ll find no other film that is clearer, more observant of this national nightmare than this, and if you aren’t already pissed off by the way our government mishandled this deadly contagion, you will be by the time the credits roll.

Here’s the simple fact of what happened: at EVERY TURN the Trump Administration let political expedience stand in the way of doing what is necessary to save lives. Gibney lays out his case like a seasoned detective, lining up expert witnesses such as Secretary of Health and Human Services Kathleen Sebelius who all seem more baffled than the next at how the most powerful, most capable, and richest country in the world bent the knee to the coronavirus.

What’s surprising is how relaxed and clinical Totally Under Control is, unlike some of Gibney’s thriller-esque docs like HBO’s Agents of Chaos or We Steal Secrets: The Story of Wikileaks.  The timeline is followed beat-by-beat, creating a timeline of growing mismanagement and callous disregard that should have everyone rioting in the streets. Although Trump likes to blame China for the outbreak, including his racist descriptor of the virus, Centers for Disease Control and Prevention (CDC) director Robert Redfield was warned about COVID-19 back in January. The reaction from our government? To basically hope it just goes away or never comes here. But even if it did, surely they would be prepared to handle it, right? The Obama Administration turned over a hefty playbook on handling a pandemic crisis, preceded months earlier by a training exercise called Crimson Contagion. Oh wait…Trump got rid of all of those nonpartisan people and pretended the playbook didn’t exist so he could do what he always does, which is blame others for his failures.

While prominent figures such as Anthony Fauci and Deborah Birx (presented here as a toadie whose biggest trait is loyalty to partisan politics) make appearances, the film is really about how a system can break down when put in the care of criminals, partisan hacks, and con-men. Further deteriorating the government response is utter disdain for the scientific professionals, especially those in the CDC, who were too afraid to stand up to the corrupt administration. So we see the CDC’s utter failure in establishing an early COVID test when other countries got on the ball quickly to contain the spread. A pattern of defeat paints the CDC in a terrible light that they aren’t likely to shed any time soon, even after Trump leaves office.

As one might expect from an administration run by a President who lies about his worth, cheats on his taxes, and has been caught defrauding Americans out of millions, economic concerns took priority over saving lives. When the government does take action, it’s to do as little as humanly possible and at the cheapest cost. The goal, as always, is to not upset the stock market, seen as a barometer of a booming economy. The irony is that the poor COVID-19 response would tank the economy, anyway.

When real experts are needed to mount a national response, Trump instead assigned “Boy Wonder” son-in-law Jared Kushner, whose only experience is being a member of the lucky sperm club, to handle it. In what may be the most striking inside look at the pervasive carelessness, whistleblower Max Kennedy, describes being a member of Kushner’s team of untrained volunteers, tasked with addressing Personal Protective Equipment (PPE) shortages nationwide. With no experience, and no guidelines provided by Kushner who was more interested in getting PPE in the hands of private businesses for resale, the task force was yet another resounding fail.

Totally Under Control is the most high-profile of a wave of documentaries on our government’s disastrous response to this global nightmare. As timely as it is insightful and infuriating, it is also a must-see especially with the election just weeks away. And while I don’t blame Gibney for this, he never comes right out and says the thing that his film makes abundantly clear when seen in conjunction with Trump’s continued misinformation on COVID-19.  It’s that this wasn’t truly a case of incompetence. Sure, that is indeed a factor, but to blame mismanagement is to assume Trump was trying to do right and just wasn’t good at it. That the people around him were simply bad at their jobs. I would take issue with that. The chaos, the death, the pain caused…that was the point all along. We have Trump on tape admitting that he knew the science and that COVID-19 was deadly. We then have nine months of him saying the complete opposite, knowing it would cause people to die. Perhaps that makes the President more of a monster than some are able to admit, but Gibney’s doc makes the case very well even if that wasn’t the point he was aiming for.