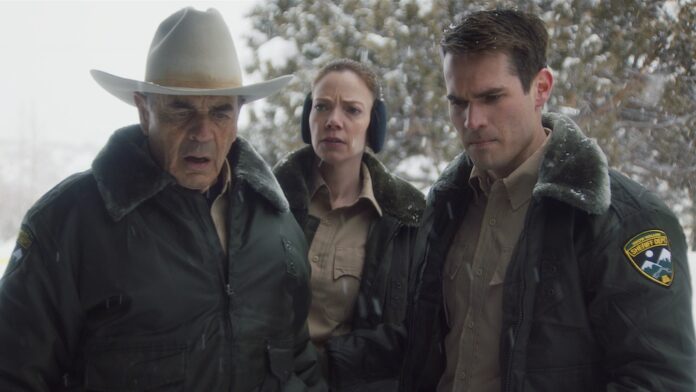 It’s October, and you know what that means? It’s time for genre pictures galore! The Wolf of Snow Hollow, written, starring and directed by Jim Cummings, fits into the slot of good ole’ fashioned werewolf movie…or so it seems. John Marshall (Cummings) is having a tough time with life. With his Dad’s health failing Marshall gets a one-two punch. Not only is he caring for his gravely ill Father, the amazing Robert Forster in his final role, but his dad also happens to be his boss, the Sheriff of Snow Hollow. Not wanting his health issues to get out John is forced to run the department and care for his Dad, which is enough to drive most people to drink…but we haven’t even gotten to the good stuff yet. He’s also running the single father gig with a teenage daughter and is an active AA participant. All of this was stacked against him when his world is turned even further upside down by the discovery of a horribly mutilated body the day after a full moon. All signs point to werewolf, which the small town is happy to believe adding yet another layer of stress to the already piled upon sheriff. As the bodies start to pile up with no answer in site John Marshall starts to find out his worst enemy isn’t a werewolf, but his own sanity. 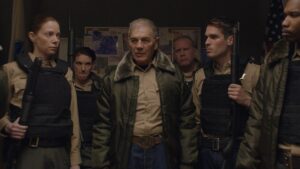 When a movie is not what you expect it can usually go one of two ways, total elation or a feeling of anger and betrayal. The Wolf of Snow Hollow was not at all what I expected but was one of the rare cases when the result was some extreme. I liked the movie, and was engrossed the whole time but at the same time it’s hard to know who to recommend it to. Elements of horror, comedy, drama, and mystery all play out in the films 83-minute runtime and Jim Cummings proves more then capable to pull off his multi-hyphenate role. This is critical, because despite having a solid cast to fall back on with Robert Forster and Riki Lindholm filling out spots behind him, Cummings is the only one with anything really meaty to chew on. The only minor exception goes to Chloe East, who plays John Marshall’s teenage daughter Jenna who gets to be involved in a few of the more tense and emotional scenes of the film. While overall, I enjoyed the film there were a few things that I bumped against. The editing, or at least I’m assuming it’s the editing, was really disjointed throughout leaving you without a real sense of how much time is passing in several parts. When the credits roll it’s clear that the events of the film take place over a longer stretch of time it feels like your watching something unravel in the span of a few days until you really start to think about it. The other was a bit of a double-edged sword. In a lot of ways I enjoyed the films refusal to stick to a genre type. It’s definitely not a horror-comedy, but it is funny at times…at the end of the day I don’t know if you can even call it horror as much as a mystery/thriller. This leads to a unique experience for sure but one that leaves you feeling like you missed something.

The true merit of The Wolf of Snow Hollow lies in watching John Marshall slowly (or quickly depending on how you look at it, see my note on the editing) unravel while the stressors pile up and no relief is given. It’s a weird lesson to watch in 2020, while most of us aren’t dealing with possible werewolf attacks it becomes all too relatable to see a man just keep taking hits until he can’t deal any longer. I respect the choice made in ending the film, where we get the happy ending but not really the way you expect. It’s less of a happy ending and more of a “not as bad as it could have been” ending. All in all, if you’re not a fan of slashers or out and out horror The Wolf of Snow Hollow may be what you’re looking for to stay in the Halloween mood without going all in on the scares. Just be advised, while it doesn’t go the traditional terror route, it does have it’s moments and one moment where a character stops her car for a deer in the road gets REALLY dark.