Home Reviews Cortland Review: ‘The Boys In The Band’Remake Of The LGBT Focused Play And...
Facebook
Twitter 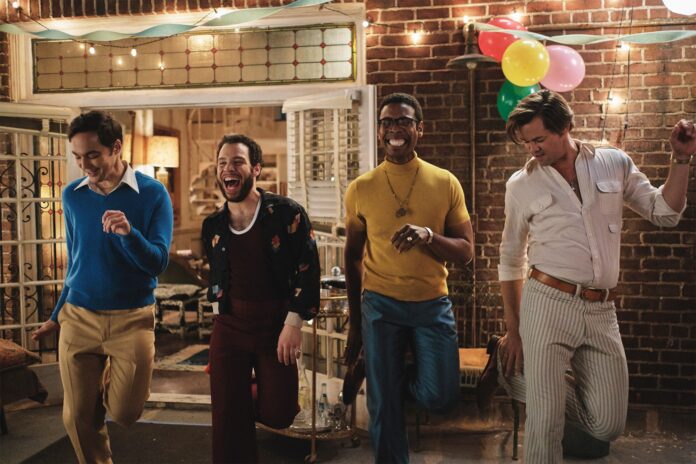 In 1968, a year before the Stonewall Riots, The Boys in the Band premiered Off-Broadway. The inner lives of gay men had never been examined with such detail on stage or screen before and drew in large crowds, prompting a London production. After 1,001 performances on the  New York stage, the film eventually received a 1970 film adaption. Since then, the LGBTQ+ community has been portrayed in numerous films and shows, some more effective than others. Now Netflix has released a film adaption, one that that is almost identical to the 2018 Broadway revival. Starring Jim Parsons, Andrew Rannells, Matt Bomer, Zachary Quinto, produced by American Horror Story giant Ryan Murphy,  directed by Tony award winner Joe Mantello, with a script by Ned Martel using Mart Crowley’s original script, this version of The Boys in the Band hits all the right notes but still seems to be missing something.

Taking place over the course of one single evening, Michael (Jim Parsons) is hosting a birthday party for his friend Harold (Zachary Quito). His plans for a smooth night go out the window as his friends, who like him are gay, each bring their own baggage to the party, including the uninvited Alan (Brian Hutchison), Michael’s straight college roommate. Parsons, who won a Tony for the role on Broadway, gives a slightly disconnected performance where big emotions seem to come out of nowhere. For some reason, his big catharsis at the end doesn’t land onscreen in an award winning performance. Rannells and Bomer fair better with more subtler performances, but Quinto’s Harold seems one dimensional at times.

While its more famous cast members really push The Boys In The Band’s emotional momentum forward, it’s the less known actors like Michael Benjamin Washington and Robin de Jesús that really knock it out of the park with such little to do. This begs the question whether or not different casting choices, i.e. less white ones, should have been made.  While I’m not arguing for casting choices to be made purely based on the need for diversity, its focus on the white man, even the gay ones, feel dated more than anything else.

While the original play served as never before seen look into the lives of gay men, this adaption feels like an example of how far we’ve come. Some characters feel more outdated than others and the “c” word is thrown around like a tennis ball. It’s kind of quaint to watch something that takes place before two events that would go on to define  the community, Stonewall and the AIDS crisis. Obviously Crowley had no idea those things would be happening in the future, but to watch something that is supposed to examine a marginalized community without the weight of two events that have come to define it, is pretty telling about how har we’ve come. If the original production or film left its audience with a sense of hope, all that is erased with the spoiler of time.

You can watch The Boys In The Band on Netlfix. Watch the trailer below.