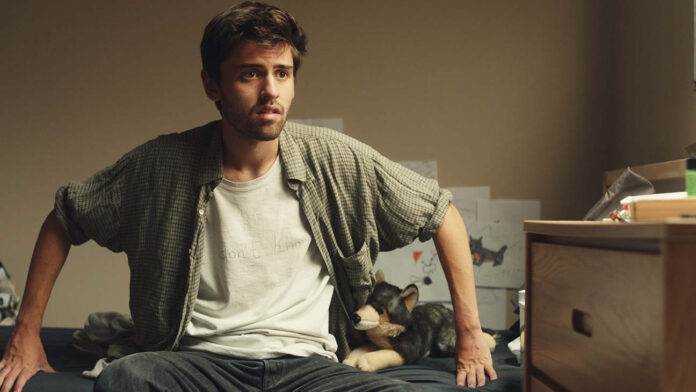 College was awesome, right! Frat parties, football games, pranks, that darn cantankerous dean….oh, I’m thinking of pretty much every college based film ever made. I’m sure there are some that had that experience but it wasn’t the majority, that’s for sure. No, for most of us college (especially freshman year) was an awkward, lonely and anxiety inducing march toward adulthood. Cooper Raiff, the writer/director/star of Shithouse gets that and provides by way of his new film, the most realistic view of a night in the life of a freshman college student that I can remember. Alex (Raiff) is a freshman college student who’s homesick and struggling to adjust to college life. His best friend is a stuffed animal, his roommate Sam (the great Logan Miller) is a nightmare and his social outlook is less then promising. Trying to break from his shell he attends a party at the frat known as Shithouse, after an awkward make-out session he strickes up a conversation with his sophomore RA Maggie (Dylan Gelula) only to see her taken away to get funky with another guy. After heading back to the dorms Alex finds that Maggie is there too, the funkiness was not to be, and what follows is a night that will change both for the better. 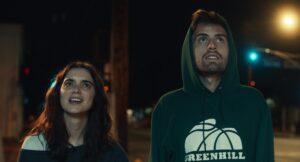 Realism is a hard thing to achieve, even is the writer has real word experience with the subject of his/her writing there’s usually an aspect of self-preservation that pops up to remove some of the hairy warts of the story. This is where Raiff gets my applause, the script he shot is so honest and so real it’s actually quite hard to watch sometimes. I deal with anxiety issues on a regular basis so sometimes these films can be tough for me to get through, but the writing here was so genuine I found myself needing to know where it went. I’m running off assumption here but I have to imagine most of what we see if based off of things Raiff went through in college. One scene in particular, when Alex first leaves the party at Shithouse and proceeds to call his mom while sitting on a sidewalk outside simply couldn’t be made up. Alex calls his mom and lies, saying he isn’t feeling well and is unsure of what to do, he just wants to hear a friendly voice, he needs someone with a real connection to interact with and him mother was the only option. 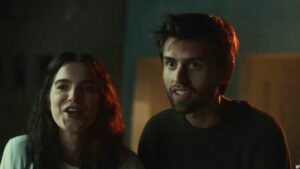 Little touches like this make the film, and they are delivered consistently throughout. At times I could actually feel that old anxiety of trying to start a conversation with a girl that I haven’t felt in 20 years, obviously credit here also goes to the performances. Dylan Gelula and Cooper Raiff carry the film, they are after-all pretty much the sole subjects of the lens. There are definitely aspects of their performance that comes off as slightly amateur, but to be honest I can’t tell if that was how it is or a choice as the end result (mistakenly or not) leads to a more believable performance. Topping it off, while his role is considerably smaller is Logan Miller’s Sam, the roommate from hell who follows suit with the story and cast and becomes that guy that all of us has known at least once. A derailed train running through the dirt who, best case, is going to get some of his dirt on you.

One thing needs to be clear before deciding to sit down with Shithouse, this is an out and out character piece. A simple story about two people getting to know each other and finding themselves as well as their way. This is my long way of saying that it can get very slow, and even boring at times. There’s not a ton of out and out laughs, or big set pieces, so don’t expect them. If a quieter, more focused film about story and relationships is your thing, I don’t think you’ll be disappointed, it’s not exciting but it does entertain.