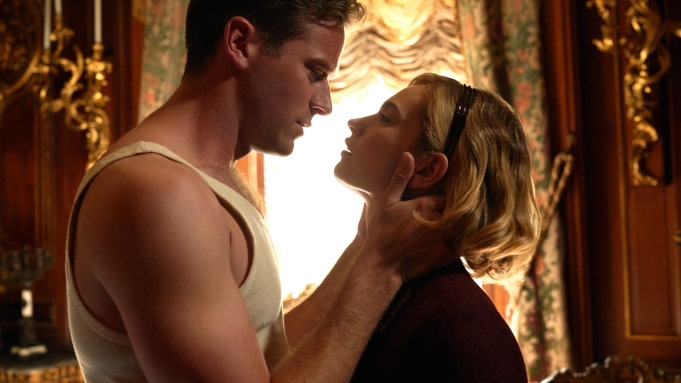 There’s no truer adage than “There’s a thin line between love and hate”, just as romance movies and horror movies make a strangely perfect combination. Ben Wheatley, a director who has been better than most at blending genres to create unique concoctions, attempts to do so again with his adaptation of Daphne du Maurier’s Rebecca, famously adapted by Alfred Hitchcock in 1940. This updated version maintains the haunting atmosphere of Hitchcock’s film, with greater emphasis on the perceived perfection of the title character and how that impacts another woman who dares fill her shoes, but Wheatley has also crafted an enticing, glossy romance-thriller good enough to stand on its own.

Gorgeous, glamorous Monte Carlo is where we are introduced to a young woman (Lily James) working as an assistant to the rich and snooty Mrs. Van Hopper (Ann Dowd). It’s there that she encounters the handsome and charismatic Maxim de Winter (Armie Hammer) who sweeps the innocent woman off her feet with expensive lunches and road trips to places she’s never been. When the time comes for them to part ways, Maxim decides he simply must marry her, to which she agrees, and is whisked away to his coastal estate, Manderlay, a place that is like a dour version of Downton Abbey.

In all of its forms, Rebecca is about how the new Mrs. de Winter struggles to maintain her identity with the looming presence of Maxim’s titular dead wife everywhere. There’s nothing supernatural about it, but you’d never know it from Mrs. de Winter’s view. She is immediately smacked down from her newlywed bliss by the cold-hearted housekeeper Mrs. Danvers (Kristin Scott Thomas), who idolized Rebecca and never misses a chance to find Maxim’s new wife lacking.

The script co-written by Jane Goldman carries with it the same eeriness as another of her atmospheric thrillers, The Woman in Black. Insecurity rages within many women, due to societal pressures which emphasize beauty as virtue, but you add on the need to be a good wife and it can be too much. But when faced with the constant reminder that you’ll never be as good as your husband’s dead ex-wife, what is there to do? How does one compete with a ghost? Wheatley and Goldman, both masters of their spooky craft, find terror in the seemingly mundane, like Mrs. de Winter’s hairbrush which still has some of Rebecca’s hair on it.

Furthermore, we see how insecure men can use well-meaning women like Mrs. de Winter to make themselves feel stronger. His constant gaslighting and passive aggressive attitude diminishes her self-confidence and grip on reality, while she also faces public humiliation when forced to interact with those who knew Rebecca personally and can’t stop beaming about her.

It’s interesting that Wheatley took on this film and the challenge of retelling a stone-cold Hitchcock classic, and then decided to leave out much of his trademark style. You won’t find much of a satirical bent here, and certainly none of the violence we’re accustomed to from him. He does capture the coldness of Mrs. de Winter’s surroundings, both from the people around her and from Manderlay, a place that looks like a fairy tale princess’ castle one minute, but much like her husband, can turn dark at a moment’s notice.

Without giving too much away, Rebecca shifts gears into a crime movie, and while that still holds some appeal, it’s nothing compared to the grip the previous acts have. While Mrs. de Winter is forced to become more like Rebecca to deal with a very-real threat to her crumbling marriage, the film loses much of what had made it so entertaining in the first place, which is the almost-mystical hold Maxim’s deceased wife has over everyone and everything. Making her feel like a real person does the movie no favors. Court cases and murder mysteries have nothing on watching Mrs. de Winter tangle with Rebecca’s overpowering legacy.

It’s the legacy of Hitchcock’s movie that Wheatley has to contend with, and he does so by moving out of his comfort zone. The opening sweep of courtship and passion, vividly shot and full of life, shows Wheatley could pull off a straight romance if he chose to. That he’s managed to make Rebecca feel new, because let’s be honest that a lot of people will never see Hitchock’s take, says a ton about Wheatley as a filmmaker and what he’s capable of.